Maine Class A Preseason Top 10: Can Lewiston Make It 4 Titles In A Row? 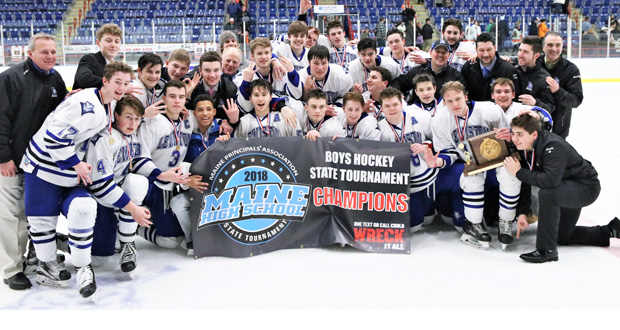 For the first time in quite some time, the Class A, race appears to be wide open. No. 1 Lewiston  is trying to make it a four-peat, but did suffer some losses to graduation and players leaving the program as Alex Robert transferred to Deerfield Academy and Sam Frechette is suiting up for the L/A Nordiques of the NA3HL. Both would have been seniors. What Lewiston has is a good feeder program that helps with their depth.

Archrival No. 2 St. Dominic’s return all their major pieces including foreign exchange student Gaston Fuksa who was outstanding for the Saints in goal. Expect them to  give the Blue Devils a run for their money for the Northern A title.

No. 3 Falmouth leads a wide open A South as they look to replace Travis Roy winner Theo Hembre and Brendan Hickey. They have some younger skilled players they will try to replace 89 combined points.

No. 4 Bangor is another team knocking on Lewiston’s door. They have solid depth at the forward position to go along with the defense and a solid goaltender. It will be a fun three-team race in the North.

The No. 5 Biddeford Tigers got hot at the right time en route to a state championship berth. They are expected to be contenders in A South again. Last year’s leading scorer Nick McSorely is only a sophomore.

Replacing major pieces will be in order for No. 6 Cheverus as they lost eight seniors. Out of those eight, three of them were goaltenders.

A team that can make a leap in A South is No. 7 Thornton Academy. Senior goalie Sean Dube has shown his first three years he can steal a game or two in net. When he’s on he can provide positive momentum for the Golden Trojans.

The No. 8 Edward Little Red Eddies could make some noise in A North after finishing second a year ago. They have solid players returning at all three positions.

No. 9 South Portland/Waynflete/Freeport could be a sleeper team in the south. Some of their key contributors at each position last year were underclassmen. Expect them to build off from a season ago.

No. 10 Mt. Ararat/Lisbon/Morse/Hyde is a team from the schools that usually play a Tier II/III schedule that can surprise some of the top teams. This year is no different with Noah Austin leading the way after a 25 -goal and 19-assist junior campaign. The depth of this team lies on defense.