Getting on the scoreboard early is a huge boost in any hockey game, lifting up the confidence of the team scoring goals, while making the road more difficult for the team scored upon.

Such was the case Saturday in a Massachusetts Final Four semifinal game at Canton Ice House. The Cardinals scored twice in the first 5:08, led 3-0 midway through the first half en route to a 4-0 blanking of Clergy.

Sharpshooter Ryan Leonard scored the first two goals of the game and sent the Cardinals on their way. 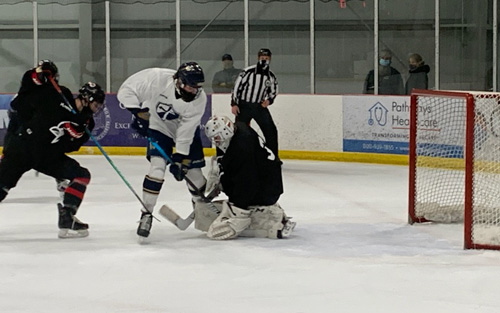 Cardinals goaltender Ben Zaranek snuffs a scoring attempt from Clergy forward James O’Toole in first half of the Cardinals 4-0 win.

“Obviously, our whole line wanted to set the tone early,” said Leonard. “Scoring first like that, it gives you good momentum going into the next period or half. I feel that once we score, we get off to a better start and grab control of the game.

Brandon Spaulding, one of Leonard’s linemates, echoed that same sentiment.

“We definitely came out flying and put a lot of pucks on net,” Spaulding said. “We always talk about getting off to a fast start. Once we get a few in the net we are off and rolling.”

In addition to winning the scoreboard, the Cardinals held a vast advantage in offensive zone play, outshooting Clergy by a 32-12 mark. Clergy goalies Brandon Carberry and Nick Bucella combined for 28 saves.

The Cardinals scored the only goal they would need just 2:57 into the game. Leonard took a pass at the blue line from defenseman Matt Hanscom, exploded past a Clergy defenseman and snapped a shot into the top corner. Spaulding also had an assist on the goal.

At 5:08 of the first half, Leonard would strike again. Ryan Shaw’s blast from the right side was wide, but the puck caromed off the boards right to Leonard, who calmly snapped it home. Defenseman Jack Turowsky was given an assist as well.

Later on in the half, at the 11:27 mark,  the Cardinals lead expanded to 3-0. The goal went to defenseman Bryce Russ, whose low, hard shot from the blue line found its way into the back of the net. Jake Iby and Steven Rougeot got assists.

In the second half, Clergy had three power play opportunities, but really didn’t get a lot going on any of the chances. What shots they could get on net were easily handled by Cardinals netminder Ben Zaranek.

Shaw closed out the scoring with a nasty wrist shot from just inside the blue with 50 seconds remaining in the game.

“We definitely played a little more defensive in the second half,” Spaulding said. “We don’t want to let up a goal, especially in a game like this. We have solid defense and our goalie played great.”

The Cardinals will now face Red Army, a 4-3 OT winner in the other semifinal,  in the final Sunday back at Canton Ice House. Clergy will see the Blue Hawks in a consolation tussle.