The highly-competitive Keller Division welcomes a new member this winter, with Tabor Academy joining the loop, giving it a total of eight teams this winter.

At Belmont Hill (20-9-4), coach Jeremiah McCarthy has to replace nine seniors including top scorers and D1 commits Sam Hesler and Christian O’Neill. But the Hillies have a multitude of skaters ready to fill the void.

In the nets, junior and Yale commit Connor Hopkins is ready for another big season. Also back are seniors Jack Eselius and Andy DeVellis and junior Evan Sleight.

More depth could be a big plus for Governor’s Academy (8-17-1), where coach Larry Cockrell is optimistic he can roll four lines. 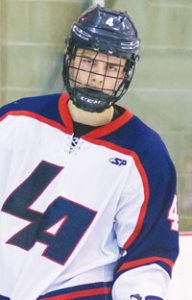 A pair of seniors – Antoine Dufour and Ben Ginsberg are two quality returners on the blue line. New junior Alex Grade and sophomore Ryan Roskey hope to have key impacts.

Senior Will Friend will look for increased minutes in goal. 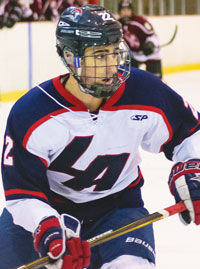 The Spartans will be young up front. Sophomore Sam Colangelo, already committed to Northeastern, will be a key forward for coach Robbie Barker, who also has juniors Ethan Bastien and Ethan Zarak-Croke and sophomore James Broderick back. A big boost to the offense will be the recent return of senior Neil Shea (Northeastern commit) from the USHL. The forward lines will be bolstered with the arrival of talented guys like Connor Sweeney, Gunnar Fontaine, Tyler Young, John Riggins and Simon Gluzman. 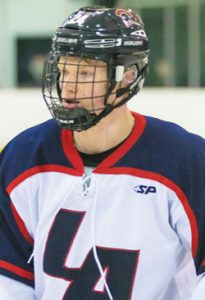 Junior Ian Graiff, last season’s back up returns in goal and looks to secure the #1 spot between the pipes.

Looking for its third straight post-season bid, Milton Academy (14-10-2) boasts a blend of skill and ability across all three positions. 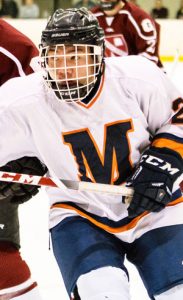 Offensive catalysts for the Mustangs project to be returning seniors Tyler Campbell (30 pts) and Tiger Zhang (27 pts). A young player to keep an eye on is freshman Matt Beniers.

On defense, senior Velan Nandakumaran (24 pts) and senior Ryan Wilson (22 pts) will be a solid force on the blue line for coach Paul Cannata. A newcomer to the rotation is junior Emmott Powell.

It was a down season last winter for Noble & Greenough (10-17-0). But a lot of young players gained valuable experience which bodes well for the upcoming season.

Coach Brian Day does have some firepower to use up front, led by seniors Jerry Harding (30 pts, Providence commit), Sean Wrenn (22 pts) and Ben Rice, a D1 baseball recruit.. Also vital to the attack are juniors Ryan Stevens (committed to Yale) and Will Zink and sophomore Jack Cronin.

Senior Trevor Spence, junior John Murray and sophomore Pierce Kenney all return on the blue line for the Bulldogs.

Senior Matt Lane is back in goal. He got some valuable minutes last winter between the pipes.

Balanced scoring from all lines and a stingier defense will have St. Sebastian’s (14-12-3) in the battle for the league crown. The Arrows were young last year and have a bevy of returners that were key players.

Keys on the blue line for coach Sean McCann are senior Blake Colman (14 pts) and junior James Davenport (also a Brown commit). A welcome addition to the lineup is sophomore Jayden Struble, a recent commit to Northeastern.

Goaltending is also a strong point for the Arrows, as sophomore Drew Commesso, a Boston University commit, moves into the #1 spot in the rotation.

Looking forward to its league debut is Tabor (13-10-3), long an independent. The Seawolves have just five seniors, but the core of younger guys all gained valuable experience last winter and will have the team ready for the night in-night out battles in the Keller Division.

A quartet of blueliners also returns. Juniors Cam Barbagallo, Connor Guyette, Tyler Harvey and Ian Gindhart give the Seawolves solid experience on the back line. 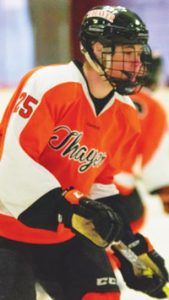 With Jeremie Forget, who played all but a few minutes last winter, having graduated, sophomore Brandon Sherman projects to move into the starter’s role. 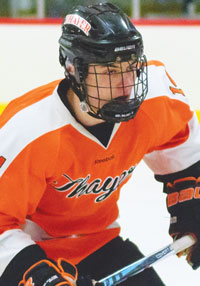 With a boatload of talent returning from a club that took New England Elite champion Kimball Union to overtime in the quarterfinal round, keep an eye on Thayer (20-10-0). The Tigers will be legitimate challengers to the league crown.

Coach Tony Amonte’s club should score a bunch, led by the senior trio of Jay O’Brien, a Providence commit and potential NHL draft pick in 2018, Aidan McDonough and Tristan Amonte. Senior Evan Googins is another key returner in the forward lines, along with juniors Reilly Moran and Christian Hayes.

There is plenty of experience on the blue line., anchored by senior Jayson Dobay, a UMass-Amherst recruit. Senior Cam Lemanski, senior P.J. Garrett and junior Jake Flynn all were vital defensemen last winter.

The Tigers also return their starting goaltender, as workhorse Jimmy Scannell is back for his senior season. 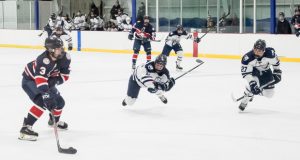