Hoosac School is excited to announce the addition of Girls’ Ice Hockey, starting in the 2016-2017 school year.  Hoosac School, founded in 1889, is a private co-educational boarding school located in Hoosick, NY near the borders of Vermont and Massachusetts, in upstate New York.

The team will be coached by Bill Ward, who has formerly coached in the Girls Prep ranks at Hebron and National Sports Academy.

“From the moment I met Bill I knew he was the right person for Hoosac.  He displays the same ideals, a dedication and enthusiasm for each individual student, that Hoosac was founded on, said Hoosac Head of School Dean Foster. 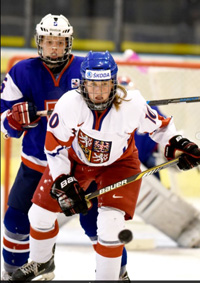 Bill Ward is one of the most respected coaches in the history of girls’ prep school hockey.  Over the course of 12 years, Bill has helped 40 student-athletes achieve their dream of playing Division I college hockey, and 43 players who moved on to Division III college hockey.  Three of Ward’s players went on represent National Teams:  Taylar Cianfarano with the United States U18 Team, Kali Flanagan with the United States U22 Team, and Denisa Krizova with the Czech Republic U18 and Senior National Team.

Two players, Celeste Brown and Beth Hanrahan, are currently playing professional hockey for the New York Riveters of the National Women’s Hockey League (NWHL), and one player, Nicole Giannino, is playing for the Boston Blades of the Canadian Women’s Hockey League (CWHL).  Bill has built relationships with coaching staffs at every Division I and Division III women’s college hockey program in the United States.  His expertise in women’s hockey is respected around the world.

“I am thrilled with the opportunity to create and build the Girls’ Hockey Program at Hoosac,” Ward said upon accepting the position. ” I look forward to recruiting female student-athletes from around the world to enhance an already well-established, diverse student body, and then developing those student-athletes aspiring to a college hockey career.  Hoosac prides itself on developing the whole person, which is the philosophy I have stressed in my nineteen years of coaching hockey at various levels.  I will utilize my connections within the college hockey community to help our student-athletes find the best fit for their college education.”

“Coach Bill Ward’s knowledge and expertise in developing ice hockey players at the College Preparatory level is unparalleled.  I am proud to say that he is my daughter, Sarah Sinning’s, coach and mentor, and has had a profound impact upon her development, both as a hockey player and a young adult who is about to achieve her dream of playing college hockey.”