The summer of his junior year at prep school, Garnet Hathaway had a big decision to make about his future. He was an elite player in both hockey and soccer and needed to decide which sport to focus on going forward as college beckoned right around the corner.

Hathaway decided it was hockey that would be his main focus. It looks like the decision was a good one. 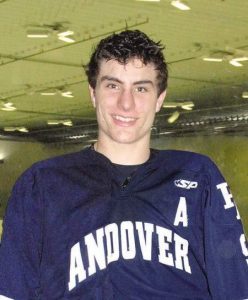 Now 27, the former Phillips Andover star and Kennebunkport, ME native is a key member of one of the top teams in the National Hockey League – the Calgary Flames, who heading into the first weekend in March trailed only the Tampa Bay Lightning in total points.

“If someone had told me then that I would be where I am now, it would have made the decision a lot easier,” Hathaway said. “It was a tough decision but it has worked out well.”

After being one of the top scorers for the Big Blue his junior season (the team’s leading scorer that winter? None other than NY Rangers star Chris Kreider), Hathaway played in the Hockey Night In Boston Elite Tournament that summer for coach Mike Addesa, who liked Hathaway’s game and suggested that new Brown assistant coach Mark White come take a look. 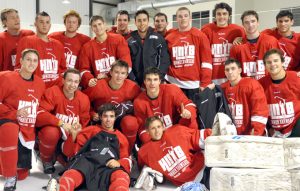 White liked what he saw and following his graduation from Andover in 2010, Hathaway was on his way to Brown. He skated four years for the Bruins.

“Education was a big part of my looking at schools,” he remembered. “I was fortunate to have coach White talk to me after he took the job at Brown. I not only got to play Division 1 but got to experience all that Brown had to offer.”

During that HNIB Elite Tournament in 2009, which included college players and a couple of top junior teams from Europe, Hathaway was named a Top Pro Prospect Award winner. That was a huge confidence booster for him.

“You watch games on television and say it is your dream to play in the NHL,” he said. “That was a big moment. It was a pretty big milestone for me. It was another step. It made it (playing in NHL) more reachable.” 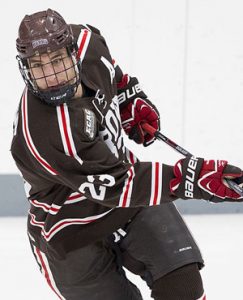 Hathaway as a member of Brown University

Between his junior and senior years at Brown, Hathaway attended a couple of NHL Development Camps, one in Boston and one in Pittsburgh and got his first taste of what the professional game was like.

“I got to see what it was really like,” he said, “that it was something possible for me.”

Addesa was a scout for the Calgary Flames and he, along with fellow Flames scout Frank Anzalone, kept tabs on Hathaway. After his senior year ended at Brown, Hathaway signed with Calgary, skating in eight regular season and one playoff game at the end of the 2013-14 season with the Abbotsford Heat, Calgary’s AHL affiliate. He then signed a two-year AHL contract, putting up 19 goals and 17 assists in 2014-15 for the Adirondack Flames.

“There were several factors that attracted me to Garnet Hathaway when I first observed him playing in games,” Addesa said. “He was not only a good skater, he was a strong skater with a very good first three strides. His hand skills were above average and he had both good on-ice vision and overall ice awareness. His situation awareness that required quick and immediate reaction was a strength that only elite players possess.”

Hathaway started the 2015-16 year with the Stockton Heat, Calgary’s new AHL  club, before making his NHL debut later that season with the big club, registering three assists and 31 penalty minutes in 14 games.

“When I got to the AHL level, it was eye-opening,” said Hathaway. “There was much more organization, the pace was much faster, the skills were that much better. I picked up the quickness aspect and knew that I belonged. I was learning stuff every day and getting better.” 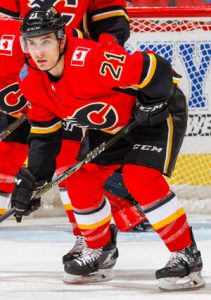 The following season, Hathaway played 26 games with Calgary, netting his first NHL goal in the process. In 2017-18, he spent the majority of the year with the Flames. registering 13 points and 88 penalty minutes.

This year, he has been with Calgary the entire season, and has seven goals and three assists heading into tonight’s game with the New York Islanders. On a team with scorers the likes of Johnny Gaudreau, Elias Lindholm and Sean Monahan, Hathaway knows he has a certain role, and does it well.

“A big role of mine is to create energy, as well as being physical,” he said. “I want to be hard on the puck and challenge these teams to play through me rather than around me. I have been getting more responsibility on penalty killing lately and I take a lot of pride in that. Special teams help teams win games.”

Hathaway as a member of the HNIB Mass/NE Sophomore All-Stars team in the 2007 Boys Major Showcase. Also on the team was Noel Acciari, now with the Boston Bruins.

Hathaway played four years at Phillips Andover. Prior to that he spent a freshman season at Cheverus HS in Maine, helping to lead the Stags to a Maine Class A championship. He participated in HNIB’s Sophomore All Star Tournament that summer, and made the Sophomore All Star team that played against the older competition in the Major Showcase. A teammate on that club was current Boston Bruins forward Noel Acciari.

“It was all the best kids from the area,” he remembered. “I had played against Noel in development programs throughout New England. I think I played well and competed against the best guys. It was a time coming out of my freshman year I was playing three sports.”

Hathaway is another example that just because you are not selected in the NHL draft, it doesn’t mean you can’t make it.

“There a lot more players out there than you think,” the Flames forward said. “I made it without being drafted. Look at Mark Giordano (Flames defenseman who has been mentioned as a potential Norris Trophy candidate). He wasn’t drafted and is the best defenseman I have ever been on the ice with. He’s 35. Day in and day out I see his energy, how he prepares for games. It is definitely something I try and follow.”

With his contract up at the end of the year, Hathaway hopes things work out and he can remain a Flame. But presently, there is a bigger focus.

“That’s why I have an agent,” he said. “Right now, in my career, I want to win a Stanley Cup. I am focused on winning a Stanley Cup. This is one of the best years the team has had in a long time. We’ve definitely been starting to jell as a team.”