During his hockey career, Bobby Allen achieved a lot of success, whether it was during his four varsity years at Cushing Academy, four seasons in Hockey East with Boston College, or in professional hockey. 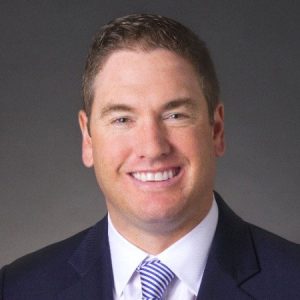 So, it should come as no surprise that Allen is equally successful in his life after hockey. Trading in his skates for well-fitted suits and sport coats, the Hull, MA native is busy in his role as a vice-president at American Century Investments.

“I miss going to the rink,” said Allen, now 40. “Some days when I wake up, I feel like I should be going the rink. Instead, I put on a suit and a tie and go to a business meeting.

“Both (hockey, business world) have their challenges. Both have their good days and bad days. They are very similar in that the harder you work, the more successful you will be. There is a direct correlation between being in business and being a hockey player. It takes a lot of practice to be good.”

Allen left home at 14 to enroll at Cushing Academy, one of the top prep school programs in New England. He played four years for the Penguins under the tutelage of coach Steve Jacobs, now back for his second stint behind the bench for Cushing, and was a member of one New England prep championship team while at the Ashburnham (MA) campus. 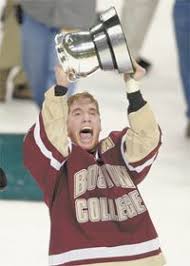 From there, it was right to Boston College, where Allen took a regular shift from day one as an 18-year-old freshman. He played for seasons at The Heights, putting up an impressive 110 points from his blue line position. During his time at BC, the Eagles reached the Frozen Four all four seasons, making the title game three of those four years. In 2001, Bobby’s senior year, the Eagles won the National title, beating North Dakota 3-2 in overtime in the final game.

“We had a nice little run.” Allen said. “I think we legitimately had a chance to win all three title games we were in. We probably should have won all three. Looking back, going to four Frozen Fours was special enough. It is pretty impressive.”

After his freshman season at BC, Allen was drafted by the hometown Boston Bruins in the second round of the NHL draft. In 2001, he started his pro career in the AHL with the Providence Bruins, then was dealt late that season to Edmonton, where he finished up with Hamilton, the Oilers AHL affiliate.

Allen stayed with Hamilton for 2002-2003, making his NHL debut with Edmonton that year, getting the call up for one game. A year with the Toronto Roadrunners and two with the Albany River Rats followed, before he was re-acquired for the 2006-07 season by Boston. 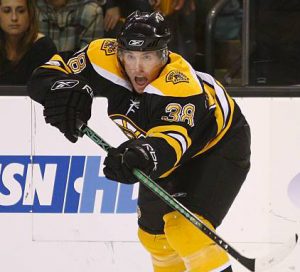 Bobby Allen with the Boston Bruins

“That was the year of the lockout,” he said. “I didn’t make the  team in Boston but got called up mid-season. I made the big team in 2008 out of camp (playing 19 games) before I suffered a herniated disc in my back. I was going to be a free agent anyways and Boston was not going to bring me back. I tried to heal up and get ready for the next season but I couldn’t get my body back to where it needed to be to play.”

So, Allen retired from hockey at the age of 30. What was next?

“(The investment world) always interested me,” said Allen, who was a member of both the USA Select 16 and 17 teams during his days at Cushing. “I knew it would be a tough transition. In September of 2008 it was the global financial crisis and it was an awful time in the financial world. It took me about 9-10 months before I decided what to do. I figured the easiest way was to go to be a financial advisor.”

After 18 months or so, Allen came to the conclusion that the advising world was not for him. He felt he would be best served on the sales side of the business.

During this time, Allen also joined the coaching staff at Hingham HS. He met Jim Boyle, whose sons played for the Harbormen and who happened to be a president at John Hancock Financial.

“He helped guide me as to where to go,” Allen said.

Bobby spent five years at John Hancock, then a year at Neuberger Berman before landing at American Century Investments, where he will be two years in May. At ACI, Allen is a vice-president DCIO covering the New England territorial region. In laymen’s terms, he is a mutual fund wholesaler. 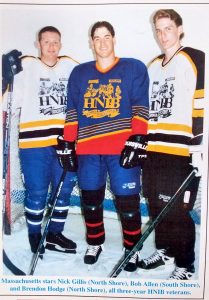 He remembers his days playing in the Hockey Night In Boston Showcase fondly. He was featured on the Showcase magazine cover in 1996, heading into his senior year at Cushing.

“There wasn’t a better way to get noticed,” Allen said. “To have your face show up in an HNIB magazine or newspaper was great. At Cushing we were all reading it. It was a big deal playing in the Summer Showcase. HNIB put your name out there and showed we have a lot of good players in this state, and the same for other kids in other parts of the country. It is a good way to get exposure as a high school athlete.

“I still have all that stuff (magazines). It was a special time in my career.”

Like many former professional players who retired, Allen was looking for a way to stay in the game.  His wife was (and still is) an English teacher at Hingham HS.  He joined the Harbormen staff not long after retiring as a player.

“I was very fortunate that Tony Messina (Hingham head coach) allowed me to help out,” Allen said. “I think he was a little guarded at first with me having played professional hockey. It was nice to be involved, and get up to speed on the Hingham hockey tradition.

“I wanted to stay in the game and help kids get better. My passion for hockey has never left. It is a great group of kids that works hard. Hingham is really a special environment for public school hockey. It’s a big deal and kids treat it like it is a big deal,” he added.

Once again, Hingham is one of the premier programs in Massachusetts and will again be challenging for a Super 8 championship. Allen’s knowledge and experience can only help matters.