Here are the match-ups for Sunday’s Girls Prep championship games.

* Both games at Worcester Ice Center. 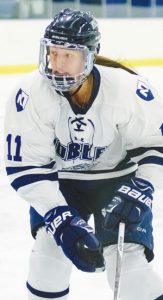 * Top-seeded Nobles advvanced to the final with a 1-0 win over #4 Loomis Chaffee. The Bulldawgs lone goal came from Lily Farden in the opening stanza. Kelly Pickereign had the shutout in goal.

*  Top-seeded Rivers held off a rally by defending champ Worcester Academy and took a 5-3 win to move on to Sunday’s championship game. Kaitlin Shaughnessy and Camille Phelan each scored two goals to lead the Red Wings attack. Jenna Letterie also had a goal. Micaela Sindoris, Holly Silva and Melissa Macri had goals for the Hilltoppers.

* Chloe Aurard’s goal with 11 seconds left in regulation gave #2 seed Vermont Academy a 3-2 win over St. George’s. Kristyna Kaltounkova had the other two goals for the Wildcats.