Heading into the annual Harrington Tournament it co-hosts each December with Milton Academy, defending D1 champion Nobles stood at a pedestrian, for them, 3-2 overall, already more losses than all of last season, when the ‘Dawgs went 31-1-1 en route to the New England title. 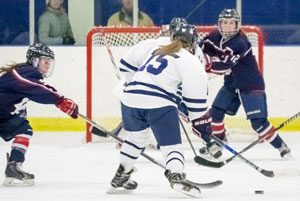 It looks like Nobles may be back on track. The ‘Dawgs swept four games at the Harrington Tournament, including three one-goal wins, to improve to 7-2 heading into holiday break.

“It was a very competitive tournament,” said Nobles coach Tom Resor. “Thirteen of the 16 games were either tie games or one-goal games. For us, we played consistently well. We got a lot of big plays (timely save or goal) when we needed them, and our special teams were strong.”

Another positive was the balanced scoring attack. Senior Becca Gilmore, who was the tournament’s leading scorer with six points, had three goals on the weekend. Eight other players had one goal apiece.

In the title game, Gilmore, sophomore defenseman Rose O’Connor and freshman forward Maeve Connolly had goals for Nobles, while junior goaltender Kelly Pickereign made 19 saves. Finley Frechette and Bella Kang had goals for St. Paul’s, which had rallied to tie the game after falling behind 2-0 in the first period.

Danielle Brown and Cassidy Piersiak had the goals in the win over Lawrence. Casey O’Brien, Lily Farden, Nicki Lutschaunig and Gilmore had goals against BB&N, while Gilmore and Katie Tresca scored against Williston.

At the Patsy Odden Tournament held at Taft School, Founders League rivals Loomis Chaffee and Kent reached the final and played their usual tight game. It wasn’t decided until a shootout, which the Pelicans won, to claim the tournament title. The game goes into the books as a 2-2 standoff, keeping Kent the lone unbeaten in Division 1.

#1 Kent (8-0-1) got goals from Keely Moy and Jessye Ebzery and nursed a 2-1 lead into the final minute. With goalie Taylor Stadeli pulled for a sixth attacker, Loomis won a offensive zone faceoff with 10 seconds left and Linda Essery was able to bang home the tying goal.

After a scoreless overtime the teams went to a shootout. Loomis got goals in the shootout from Maddie Giordano, Kaleigh Quennec and Essery to give the Pelicans the tourney title, offsetting Kent shootout goals from Tina Paolillo and Julia Nearis

– St. Mark’s edged Lawrence Academy, 3-2, at the Harrington Tournament on the strength of goals from Emma Viens, Lindsey Dumond and Julianna Gong.

– Berkshire stunned New Hampton 2-1 at the Watkins Tournament on goals by Erin Dillon and Holley Riva.

– Margaret Sullivan scored twice and Blossom Truel and Emma Kowalka had a goal each as Cushing took down Brewster Academy, 4-2.

– Freshman Anna Shelden had the lone goal and Olivia Sollows the shutout in net as New Hampton edged Northwood, 1-0, at the Watkins Tournament

– Cushing and Winchendon battled in a scoreless deadlock that wasn’t decided until Cushing’s Remy Bragg scored in the 9th round of a shootout for a 1-0 Penguins win.

– Emma Crocker scored two goals, and Micaela Sindoris and Laura Hill had one each as Worcester Academy blanked Southfield, 4-0.