It was a breakthrough season for Kent last winter, winning the school’s first-ever Founders League championship. The Lions have picked up right where they left off, heading into the holiday break with a 7-0-1 record and the Patsy Odden Tournament championship. 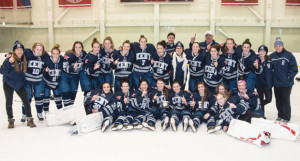 In the final, Kent took care of Phillips Andover, 5-1, a team that had posted some big wins of its own thus far in the early going. Captain Elena Gualtieri led the scoring attack with a pair of goals.

“We have worked very hard to put many details in place since November 10th,” said Kent head coach Shawn Rousseau. “The game versus Andover was our eighth game of the season, and that game felt to me like the window during which everything truly crystalized for our team. Our execution was right on.”

At the Patsy Odden Tournament, Kent also edged fellow Founders League power Loomis Chaffee, 1-0, thanks to a shorthanded goal by Kiyono Cox, who also had a goal in the title game.

The Lions also edged Lawrenceville School of New Jersey, 2-1, with goals from Gualtieri and Cox, and blanked Hotchkiss, 3-0, behind the shutout goaltending of Alyson Baldwin.

“While we are consistently making plays and creating offense, it is probably our defensive effort that has been most notable,” Rousseau said. “Through our first eight games, we’re averaging only one goal against. Our team discipline has certainly been a key to our early competitive success. I think that our depth and the fitness of our players have both been criticial elements, as well.”

And, it has been a total team effort so far.

“At the PKO Tournament, one opposing coach told me ‘you guys just kept coming after us, line after line, all looking just the same.’ While I don’t think we looked as good as she proposed, I do agree that we have a balanced team with everyone contributing in a valuable way.”

Williston Northampton also enjoyed a successful holiday tournament weekend, emerging as the winners at the Harrington Tournament, loaded with many of New England’s top clubs.

In the title game, the Wildcats defeated Westminster, 2-0, handing the Martlets their first loss of the season. Williston rode the shutout goaltending of Morgan Fisher and got goals from Hannah Touzos and Delaney Belinskas in the win.

Williston also shut out tourney host Nobles, 1-0, with Meg Rickard scoring the lone goal. The Wildcats opened the tournament besting BB&N 4-1 and rallied to earn a 3-3 tie with Pomfret as well.

At the Southfield Tournament, which hosts several top Division 2 clubs, Rivers showed that it meant business, with three impressive wins (there is no championship game), blanking both Kingswood Oxford (7-0) and Millbrook (4-0) and also edging two-time New England champion Gunnery, 2-1, in overtime.

Freshman Jenna Letterie proved to be the hero with the OT tally, after taking a pass from Missy Segall.

“Especially exciting was the OT match-up with Gunnery, as we had faced them in last year’s New Englands and lost to them in overtime,” said Rivers head coach Malcolm Spurling. “This game went back and forth with Rivers having the edge this time around.”

“We played really well, executing well in all three zones with an especially strong presence in the defensive zone,” Spurling said. “We realized exceptional goaltending from our goalies, led by junior Clara Pingeon and freshman Megan Gazard. Michelle Ryder also filled in.”

St. Paul’s won its own holiday tournament to improve to 9-1 overall heading into the break. The title game was a 1-0 win over Northfield Mount Hermon on a goal by Miriam Eickhoff. Kerri St. Denis notched the shutout in goal.