The Choate girls outlasted Kent, 2-1, in overtime to win the championship at the Patsy Odden Tournament, hosted by Taft School.
Sophomore Meggan Rodriguez scored the game-winner, driving hard to the net and deflecting home a pass from Olivia Bishop. Janka Hlinka also assisted on the play. Rodrguez had given Choate a 1-0 lead in the second period, a goal that was answered by Kent with just three seconds left in the second period. 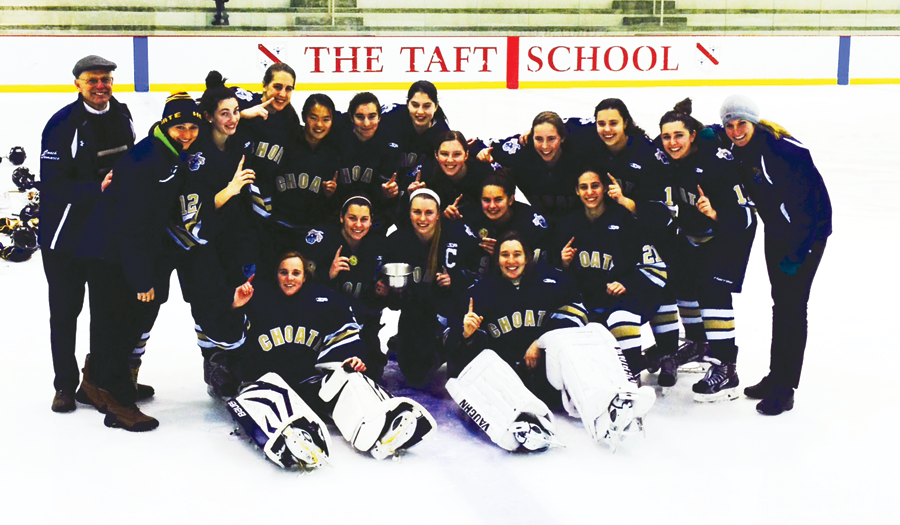 In game one of the tournament, Choate skated to a 1-1 standoff with Lawrenceville. Bishop had the lone goal for the Wild Boars, who did get a shootout tally from Hlinka to get credit for a win for tournament play.

Game two against Founders League rival Hotchkiss was also a tight back-and-forth battle, Choate prevailed 2-0 on a Bishop goal and an empty-netter from Katelyn Pantera.
Another Founders League rival – this time Loomis Chaffee – was on the docket for Game Three. The Pelicans convered on a two-on-one to take a 1-0 lead midway through the second period. In the third period, Choate got goals seconds apart from Hlinka and Rodriguez to forge on top 2-1. Bishop added an empty net goal for the eventual 3-1 win.
Coach Nicole Stock also lauded the play on junior goaltender Lauren Bailey, who has been tremendous in goal for Choate since day one. “We would not be where we are without her and her ability to make big saves in big moments.”
“This was a complete effort from top to bottom and our girls are starting to come together and believe in each other which is a great thing to watch take place,” Stock said. “They are playing with a tremendous amount of heart and determination and with a never-give-up attitude.”

The Watkins Tournament has a new champions, as New Hampton took the championship. The Huskies won the title game with a 2-0 win over host Cushing.
In fact, New Hampton did not allow a goal all tournament, also posting wins over Brewster Academy (4-0), Northwood (1-0 in OT) and Culver Academy (2-0). 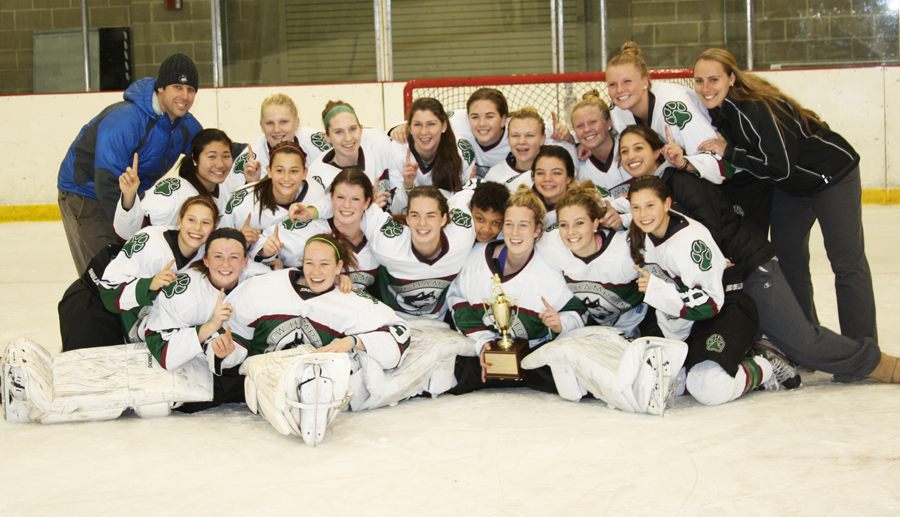 “All of the game were hard-fought and really competitive,” said New Hampton coach Craig Churchill. “But, our girls were relentless and accountable in the D-zone. When they had the opportunities, they capitalized.”
New Hampton goalie Hilary Cashin, a junior, played all four games and earned Tournament MVP honors.
Junior Dempsey Arsenault had two goals and two assists for the weekend, including the game-winning overtime winner against Northwood. Junior defenseman Allie Munroe had a goal and four assists and had the game-winner in the title game against Cushing. Arsenault and Munroe were named to the All Tourney team along with freshman Cayla Barnes, who had two goals and four assists. Junior Mallory Rushton chipped in with a goal and three assists.

Top-ranked Nobles remained perfect on the season, winning the Harrington Tournament be defeating Westminster, 3-0, in the championship game on home ice.
Courtney Pensavalle had two goals and Lexie Laing one to pace the offensive attack, while Casey Nunnelly notched the shutout in goal. Nunnelly had three shutouts over the weekend and stopped 43 of 44 shots.

The Nobles Girls won the Harrington Tournament again, knocking off Westminster, 3-0, in the title game.