The Knights were definitely a going concern last winter, and look to be a pain in the neck to play against again this year. Coach Ed Bourget says his club will rely on its senior leadership, with depth being a team strength.

On defense, seniors Lauren Jackson and Jameson McKenna will have key roles while sophomore Mia Biotti is back after a solid freshman campaign. Anna McGrath and Hillary Galle are two new freshmen looking to make a splash.

Senior Rei Halloran will be in the goaltending mix.

Young up front, the Spartans will need to find a way to generate solid offense. Defense and goaltending will be strengths. 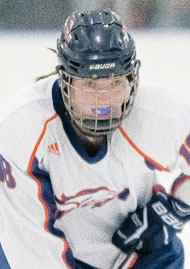 With strong goaltending and a good crop of returning forwards, the Mustangs will be tough if they can play consistent good team defense. 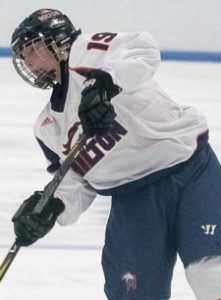 Seniors Mary Thompson (30 pts) and Sadie Lestage (16 pts, both committed to Middlebury, will be keys on offense for coach Ryan Stone, as will juniors Kate Dudley (20 pts) and Caroline Guden (14 pts), and sophomore Lily Zavolas (14 pts).

Another Middlebury commit is senior Julia Johnson on the Milton blue line. Freshman Caroline Baldwin is a newcomer ready to help out.

And in goal, senior Maggie Emerson, committed to Dartmouth, will be one of league’s top netminders.

On defense, seniors Lily Farden (30 pts), Nick Lutschaunig and Rose O’Connor have all committed to Harvard, as have sophomore Jenna MacDonald and freshman Kaley MacDonald. Junior Cassidy Piersiak is a Brown recruit.

And in goal, sophomore Taylor Hyland moves into the starters job as veteran Kelly Pickreign has moved on to BC. Hyland has committed to Princeton as well.

With over 50 percent of last year’s offensive output having graduated, the Lions will need to have a much more balanced scoring attack, to go along with solid defensive play.

Senior veteran Julianna Gong (15 pts) will be a vital cog on offense for coach Casey Bates. Looking for her role will be new freshman Avery McInerny. 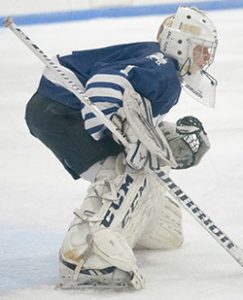 Sophomore Alicia Souliotis (12 pts) will have a big role on the blue line. New sophomore Delaney Grace and freshman Tess Barrett are defensive players to keep an eye on.

The Seawolves have some huge graduation losses to deal with, but still possess a solid core of veterans capable of taking this team pretty far.