Girls Prep Highlights: Tabor Pulls Away Late To Down Brooks In Matchup Of #1 Teams 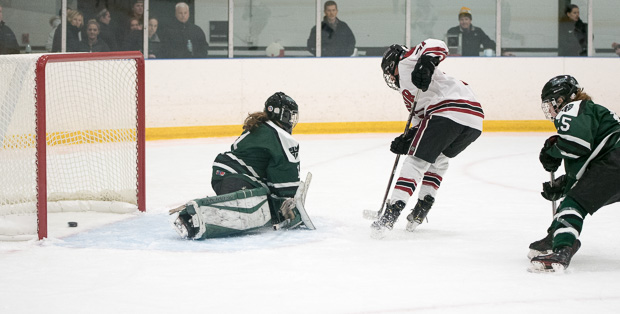 TABOR’s Skyler Irving scores one of her three goals in the Seawolves 7-3 win over Brooks.

* D1 #6 Loomis Chaffee pinned a shutout on D1 #4 Kent, 2-0, thanks to goals from Anna Hurd and Cally Dixon. Elinor Keehn registered 24 saves for the shutout.

* Gunnery got a goal from Savannah Popick with one second left in regulation to give the Highlanders a 1-0 win over Vermont Academy. Katie Broccoli had a solid game in goal for Gunnery.

* Mary Edmonds fired home three goals to power Deerfield to a 6-1 win over Northfield Mt. Hermon. Erin Howe,  Caroline Skillman and Ali Fujiyoshi each had a goal as well.

* Hannah Littlewood had two goals, and Jenna Brooks and Robin Potter each had one as Exeter defeated Worcester Academy, 4-0.

* Thayer doubled up Milton Academy in the ISL, 6-3. Claire Weber had a hat trick and Madison McCafferty added two goals.