With the dominating season Vermont Academy has had, we faced an interesting dilemma when the Wildcats dropped a pair of games this week to strong Division 1 teams. Would that be enough to drop them from the #1 spot in the HNIB News Girls Prep D2 rankings they have held for several weeks?

End result? Vermont Academy (18-2-1) stays at #1, despite the losses to New Hampton and Winchendon. This week, the Wildcats have Proctor on Wednesday, Albany Academy Friday and Northfield Saturday.

Brooks (7-3-5) moves up to #2 after knocking off Worcester Academy (2-0) and were perhaps primed to reach teh top spot but the Bishops were tied up Saturday by unranked Dexter Southfield 1-1. They get Thayer Wednesday, then a date with D1 powerhouse Nobles on Saturday.

Worcester Academy (12-3-1) will fit into the #3 spot, following up the road loss to Brooks with a 5-1 win over Millbrook. The Hilltoppers have Dexter Southfield Wednesday and then Winchendon Saturday.

Up a spot to #6 is Kimball Union (9-4-4). The Wildcats posted solid wins over Holderness (8-1) and Governor’s Academy (4-0). They look to continue their winning ways against Brewster Academy (Wednesday) and Proctor (Saturday).

A win over Kents Hill (3-0) was the only result this week for #8 Proctor (8-6-2). The Hornets will try their hand with Vermont Academy Wednesday, then have Berwick Friday and Kimball Union Saturday.

#9 Canterbury (13-6-1) broke a three-game losing streak with wins over Rye Country Day (5-0) and Berkshire (5-3). The Saints take on D1 Taft Monday and then Lawrenceville Wednesday.

#10 Greenwich Academy (8-5-0) stays in the poll, a loss to Loomis Chaffee (3-0) its only result of the week. This week’s opponents are Millbrook (Monday) and Kent (Wednesday). 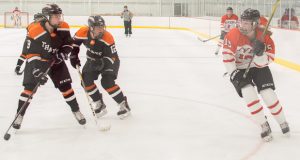