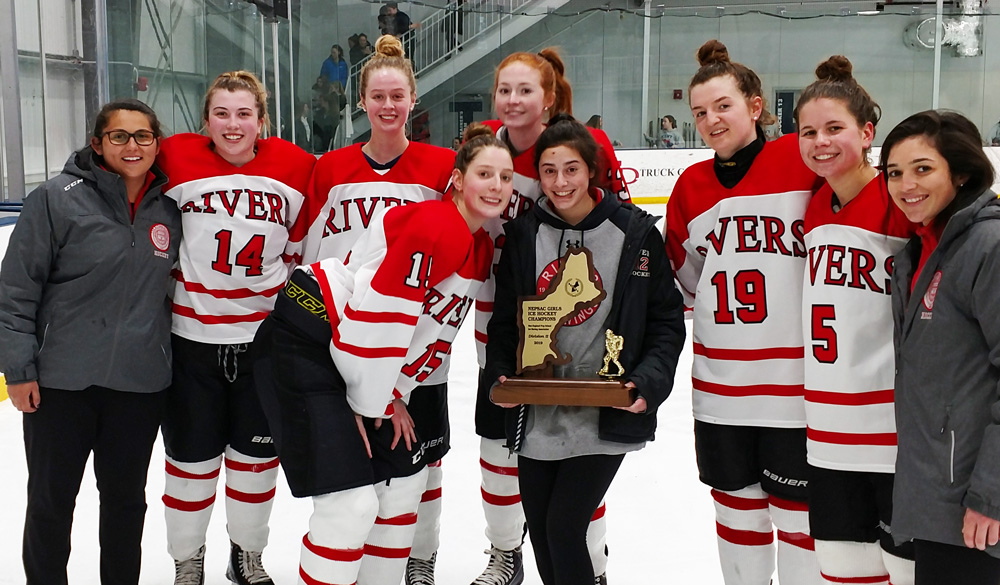 An undeniable belief has continued to resonate within The Rivers School girls’ hockey team the very minute they stepped off the ice a year ago inside this very same rink.

After the Red Wings were defeated by Vermont Academy in the 2018 NEPSAC Division 2 final, that loss has remained stuck in the Rivers’ craw ever since. When the Red Wings got together  for their upcoming campaign, the focus, to a player, was fixated on getting back to the championship game. This time, however, they were determined to finish the job.

Rivers did just that Sunday afternoon by posting a tightly-fisted 3-1 victory over top-seed Brooks School at Fidelity Bank Worcester Ice Center in the NEPSAC championship tilt.

In front by a goal heading into the third period, the Red Wings put forth a stanch defense over the final 16 minutes in securing the win. Not about to let history repeat itself, Rivers refused to allow Brooks to gain any momentum by continuing to lock the Bishops up inside the neutral zone and consistently poke checked them from their lanes once they entered the offensive zone.

“We just kept telling them to keep playing their game,” said Rivers coach Dana Trivigno. “As a team, we get pucks in and play sound defense. Today, it worked out in our favor. I felt as long as we continued to do that we would come out on top.” 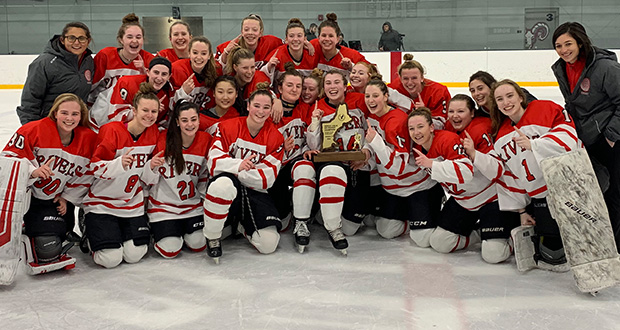 With the outcome still hanging in the balance late into the final frame, Red Wings senior Camille Phelan allowed Rivers to breath a sigh of relief after pushing in a rebound, at 14:29, to seal the deal.

“Honestly, we have never doubted ourselves all year,” Phelan said. “We have continued to build off of each game and today we kept pushing and pushing. We knew we were the underdog today so we felt we had nothing to lose and that really helped us. We wanted to go out on top and here we are.”

“These girls have worked very hard all year,” said Trivigno. “We have had a lot of ups and downs, but this senior group has really lead us through the season. I am super thankful in having them on this team this year.”

The Red Wings jumped out to a 1-0 lead midway through the first period thanks to Margaret Barrow’s power play  wrister from the right circle which eluded Brooks goaltender Caroline Kukas, who finished with 29 saves. Later in the frame, the Bishops were able to fend off a Rivers’ 5-on-3 power play and head into the first intermission down by just a goal.

However, only 1:13 into the middle frame, the Red Wings increased their lead to two goals. Senior Kaitlin Shaughnessy, skating alone down the right wing, cut in towards the net, before lifting a shot over Kukas’ left shoulder.

“It was important to keep our foot on the gas because (Brooks) is a tenacious team,” Shaughnessy said. “Our defense played well and our goaltending was awesome as well. We were able to break up a lot of plays in the neutral zone and in the defensive zone. Because of that, we were able to hold them off.”

For the majority of the second period, Brooks proved the aggressor. Starting to finally generate some space and timing, the Bishops put up 12 of their overall 20 shots during the frame. Yet nothing was getting past Red Wings freshman netminder Eve Stone, who was solid.

The Bishops could have easily gotten flustered by their missed-opportunities. Instead, however they continued to go on the attack. That effort paid off when Carly Stefanini, positioned inside the goal mouth, stuffed a loose puck by Stone with 9.9 seconds remaining to send Brooks into locker room trailing 2-1.

But any momentum seized following Stefanini’s tally appeared to evaporate in the final period as the Red Wings built a fence inside their defensive zone. Rivers was resourceful after holding Brooks to just three shots. Once Phelan scored late, all the hopes of a comeback were dashed.

“Rivers is a great team and they worked really hard all throughout,” said Brooks coach Lori Charpentier. “They got a couple of good bounces early on and we didn’t. But you cannot take away what they put forth inside their defensive zone today. Rivers played the full 200 feet the entire game. We have a great group coming back so we are excited about the future.”