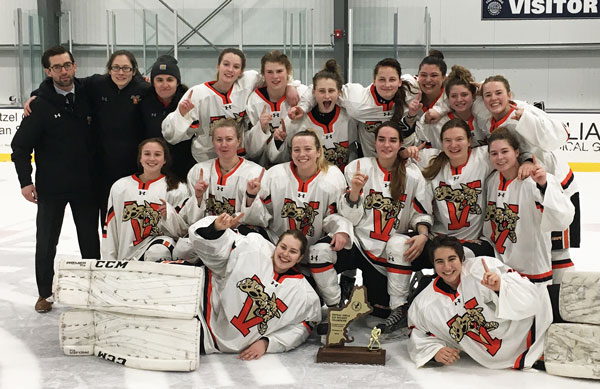 The Vermont Academy girls hockey team burst on the scene and opened a lot of eyes in the season’s early going. And they never took their foot off the gas pedal.

The run has culminated in the program”s first New England Girls D2 Prep championship, after the Wildcats dispatched top-seeded Rivers, 5-2, in the championship game at the Fidelity Bank Worcester Ice Center Sunday.

Sophomore Kristyna Kaltounkova scored three goals and assisted on the other two Vermont goals, both off the stick of playoff MVP Chloe Aurard.

“After watching several players compete and win a NEPSAC title in soccer, our excitement for the hockey season grew,” said Vermont Academy coach Lisa Marshall. “From the very first team meeting, the players set goals to chase and from there, the group began to take shape. I think the team surprised itself by winning the E.G.Watkins Holiday Tournament. That was truly a moment for the team to realize what could be accomplished when working towards such goals as a unit.” 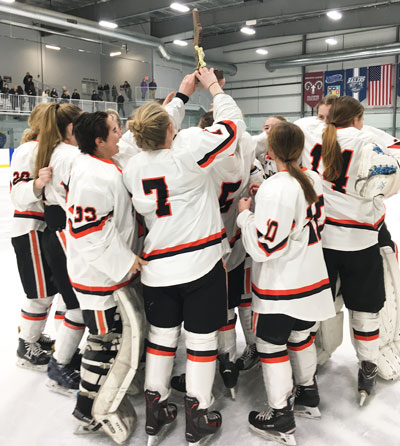 The first period was scoreless, but the Wildcats struck for a pair of second period goals to grab a 2-0 lead. Aurard got the ball rolling early on in the stanza, and Kaltounkova made it 2-0 later on.

The Red Wings, who entered the final with a 17-game winning streak, were able to close to 2-1 by the end of the period on a goal from Kaitlin Shaughnessy, assisted by Camille Phelan and Kaitlyn Nadeau.

Kaltounkova’s second, from Aurard and Jordan Loya, put Vermont Academy up 3-1 early in the third period, only to see Rivers again close the margin to one at 3-2 when Kasey Cunningham found the back of the net.

But just 26 seconds later, Aurard struck again to restore Vermont’s two-goal cushion. Kaltounkova put the finishing touches on the win with an empty net tally to complete her hat trick.

“Like much of the season, the focus was on ourselves, and what would be needed to succeed,” Marshall said. “The team had learned to respect each opponent, especially during the post-season and Rivers was no exception to this mindset. Rivers was a relentless opponent. There wasn’t just one key goal, save, penalty kill or blocked shot that was a turning point or juncture within the game. The effort and response from each player to regain and maintain momentum was vital.”

The Wildats finished the season an impressive 32-2-1, while Rivers clocked out at 22-4.