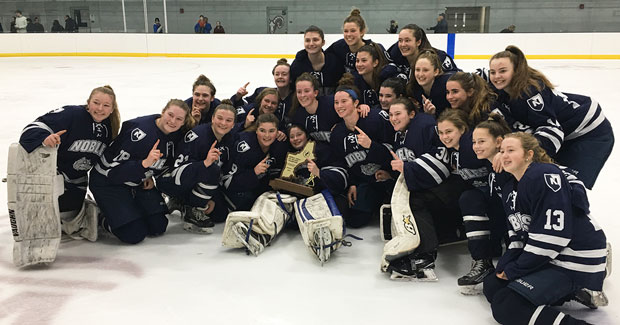 Girls Prep School championship are almost old hat at Nobles, which has established itself as a benchmark program in Division 1.

The Bulldawgs added to the trophy case Sunday, when they won yet another New England title, downing seventh seeded Williston 2-0, at the Worcester Ice Center. It was the program’s and head coach Tom Resor’s ninth New England title.

“This title is just as special as all of the others, maybe even a little more so given how many really good teams there are now in Division 1 and Division 2,” Resor said. “I do not think I have ever seen such depth and parity before. It seems each year the depth and parity improves.”

One such team was Williston. Close to not even qualifying for the post-season at one point, the Wildcats finished strong, and kept the momentum going in the post-season, with big wins over Kent and Tabor, to reach the title game. 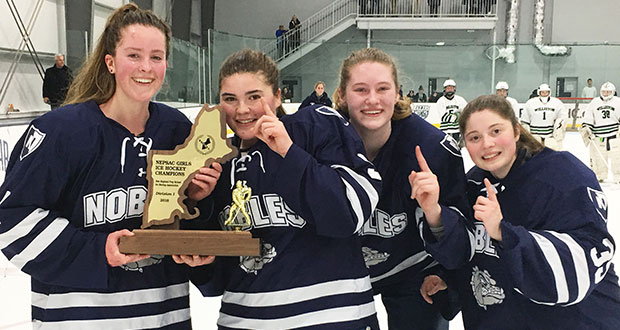 “I expected just what we got from them,” Resor said. “They are very well coaches, they work incredibly hard and indeed were playing their best hockey,” Resor said. “To go on the road and beat both Kent and Tabor, arguably the two best teams on paper, in 72 hours was a tremendous accomplishment.”

After a scoreless first period, Nobles got the only goal it would need in the second stanza. Lily Farden made a great play to keep the puck in the offensive zone. She was able to move around a defender and beat Williston goalie Dane Marquez with a shot that hit the cross bar and bounded over the goal line.

It stayed a 1-0 game until later in the third period, when sophomore Maeve Connolly drove to the net after a rink-long rush and scored the huge insurance goal.

“Having a two-goal lead late in the game definitely gave us some breathing room,” Resor said. “The goal was the result of the efforts of two extemely hard-working players – Maddie Bayard and Maeve. Maddie was able to win the faceoff to Maeve. That goal also gave everyone a boost  because no one on our team has worked harder than Maddie and Maeve all season, and they have been playing their best hockey late in the year.”

Williston (16-7-4) had some chances but was unable to beat Nobles senior netminder Kelly Pickreign, who was named Playoff MVP.

“The Nobles D did a great job of keeping us to the outside and not allowing us to create many excellent scoring chances,” said Williston coach Christa Talbot-Syfu. “We definitely tried to get our kids to shoot from everywhere in the final period. We had a couple of good chances, but Kelly was up for the challenge.”