Girls Hockomock League Preview: Chase Is On To Unseat Canton

Canton reached the MIAA Division 2 state final last winter, and the Bulldogs look to be a big concern in the Hockomock League this winter. 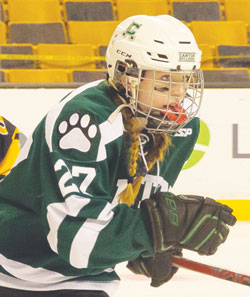 Last year’s D2 state finalist will continue to play its stingy defensive game with a veteran back line. The hope is to have that help the forwards generate more scoring opportunities.

It has been five straight tournament appearances for the Warriors, who are poised to get to the post-season again despite graduating five seniors.

Senior Nicole Connor (26 pts), a tri-captain, will backbone the defense, and get heavily involved offensively. Seniors Lilly Worthington and Madelyn Kelley are returning veterans as well.

The Warriors will also have two experienced goalies in senior Lily Potts and sophomore Cristina Coleman.

The Panthers had a solid season last year. Looking ahead, they project to be solid on the blue line. If they can get contributions from their young offense, they will be a tough lot.

An experienced blue line will be headed by senior Cassi Ronan and the junior trio of Tina Pisano, Gina Vignone and Gianna Cameron. Last year’s goalie – Natalie Stott – has moved on to prep school, opening the door for sophomore Gabby Colace.

A couple of newcomers looking to challenge right away are freshmen Olivia Stoller and Charlotte Sanfason.

New head coach Roy Bain takes over a squad that graduated six seniors, but has nine incoming freshmen. A strong core of returning players is also back.

In goal, look for freshman Jess Widdop to take the job.