Two local girls hockey stars have recently made their college choices, and both have chosen the Ivy route. 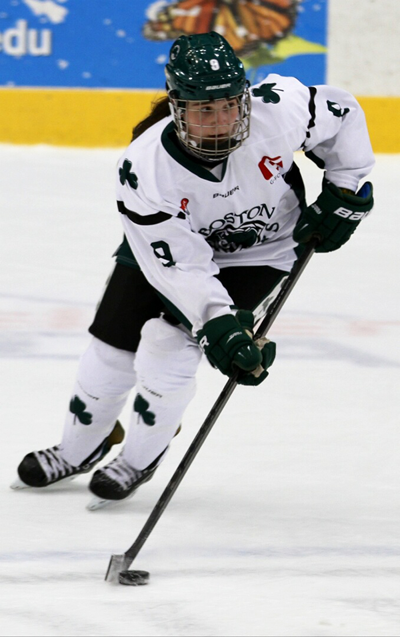 Junior Jessie Jacques, a member of the Boston Shamrocks team that plays in the Junior Womens Hockey League, has announced she will be attending Brown University in the Fall of 2015, while Caitrin Lonergran, a sophomore standout on the undefeated and #2 ranked team in Girls Division I prep hockey – St. Paul’s, has decided on Harvard University commencing with the 2016-2017 season.

The two forwards also play together in the summer on TeamOne,  a team that participates in various summer showcases, including the

“When I first stepped on campus at Brown I just fell in love with it,” said Jacques. “It is a small campus, the rink is beautiful and the coaching staff is amazing. Also, it’s near home, which is always a good thing. I wanted to go somewhere where I fit best, and where I wanted to spend four years of my life after I graduate high school in 2015. I have always heard great things about Brown, and now to be a part of that tradition is something I’m sure I will carry with me the rest of my life.”

Jacques, a native of North Reading, MA, was also looking at Clarkson, Ohio State, Vermont, Union, UConn and Harvard. She is looking

“I am super excited that I committed to Brown because not only am I going to a school I wanted to go to, but I also get an opportunity to play and contribute right away,” she said. “Now that I am committed I can still have more fun playing with the Shamrocks for the next year and a half. I am really looking forward to finishing this season and next with the Shamrocks on a very strong note before moving on to college.”

Lonergan, a resident of Roslindale, MA, was recently named to the USA Hockey National U-18 Womens team. She is thrilled with her decision to attend nearby Harvard. 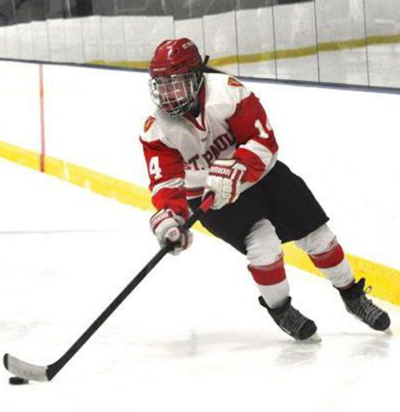 “It’s the academics, coaching, team and atmosphere that made me fall in love with Harvard,” she said. “I’ve lived in Boston my whole life and when Harvard offered me a commitment spot it was an amazing feeling knowing I could play for my hometown in college. It has always been my dream since I was a little girl.”

“I never put a deadline on myself for when I wanted to commit, it was something that just happened,” she said. “I knew Harvard was the place I wanted to be and my mind was made up. Now I can focus on my grades and SAT/ACT scores.”

The talented forward, who has a 17-20-37 scoring line this season for 19-0-1 St. Paul’s, is also focused on this current prep school season. This Saturday, St. Paul’s take on top-ranked and unbeaten Nobles, a battle between the top two girls prep teams in New England.

“Our team is beyond excited to play Nobles,” Lonergan said. “Our team is working hard each and every practice and our hard work is starting to pay off. This team has a lot of heart and dedication. Each member of the team contributes a piece to our team’s success.”

Jacques’ Shamrocks team finished one point out of first place in the South Division of the JWHL. She has an overall mark of  16 goals and 19 assists. Prior to the league playoffs in early March, the Shamrocks will play this weekend in the JWHL Challenge Cup in Washington, DC. The JWHL is considered by many to be the pre-eminent womens hockey league in North America.

“The Shamrocks has been a great experience,” Jacques said. “Playing with kids every day from all around North America and being able to call them family is an incredible feeling. I do believe my team is a big challenger to other teams in the JWHL playoffs. My team’s going to give it all we’ve got and leave everything in Vancouver (site of the playoffs).”