Defending New England D2 champs Rivers started out the year as favorites to repeat and to date have shown absolutely no reason to doubt that. 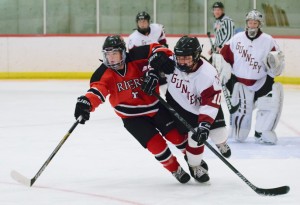 The Red Wings head into holiday break a perfect 6-0-0 after sweeping three games at the Southfield Holiday Tournament. They own a win over D1 power St. Paul’s and have outscored their opponents by a 21-4 margin so far this season.

In its first three games back after break, Rivers gets two ranked opponents (Brooks and St. George’s) wrapped around what should be an interesting contest with D1’s #1 team – Nobles – on January 11 at home.

#2 Worcester Academy (8-1-1) has been as good as advertised so far, with the Hilltoppers only loss to D1’s New Hampton in the finals of the Watkins Tournament. Coach Kevin Zifcak’s team has a 41-11 goal differential margin. Early January will see a pair of tests against two more of D1’s ranked teams with Andover (January 6) and St. Mark’s (January 8).

Another team off to a fast start is #3 Canterbury (6-0-1). The Saints won all three of their games at the Portsmouth Abbey tournament in impressive fashion and look ahead to a game at Kent on January 6th that should tell them where they stand.

A perfect run so far in games against Division 2 opponents propels Proctor (8-2-0) up a few spots to #4. The Hornets have done what good teams do, win all the games you are supposed to win. They will be at the Phillips Exeter New Year’s Tournament January 2-3. 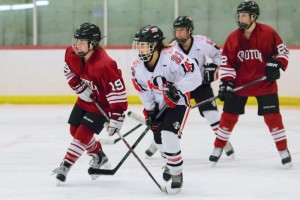 GROTON moves into the Girls D2 Poll this week after winning three games at the Southfield Tournament, including this one over Kingswood. (Photo by Jamie Callery)

Southfield (5-3-1) drops a few spots to #5 after losing to Kimball Union at its holiday tournament. Other losses have been to Worcester Academy and D1 Phillips Andover. They host D1 opponents St. Mark’s and Milton Academy upon returning to action in January.

#6 St. George’s (4-1-1) won its own Howard Tournament with three straight shutout wins to slide up a few spots. The Dragons will host #1 Rivers on January 13th.

Brooks (4-1-0) moves into the poll at #7. The Bishops will also be at the Exeter New Year’s Tournament.

Another ISL team closes out this most recent HNIB News Girls D2 poll with Groton (6-3-0) at #8. The Zebras three losses have come to D1 St. Paul’s, Worcester and Canterbury.