Just three weeks into the 2017-2018 Girls Prep Division season and there is just one undefeated team remaining. That team – Kent School (9-0-0) – is  an easy choice as the top team in the first in-season HNIB News Girls Prep D1 Top 10.

So far, in their nine-game winning streak to start the season, the Lions have outscored their opposition by an astounding 40-7 margin. 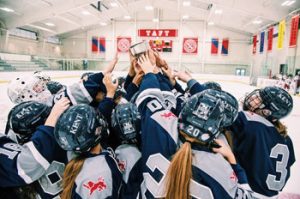 “We have stressed strong defense from Day ​One​” said Kent coach Shawn Rousseau. “Our goaltending has been excellent.  We have been fortunate to get scoring from three different lines as well as ​from our defensem​e​n.​ I think ‘the key’ is we have 23 rostered players who are all contributing valuably.​ We have 16 players on our team that have returned after last season’s effort.  Their leadership has had great impact on the start to this new season.”

Has the blazing start been a surprise at all? After all Kent reached the New England D1 title game last March and returned a good chunk of that team.

“We struggled to find our scoring in ​our first few games of the season​, ​despite having played well and while generating many grade-A chances,”  Rousseau said.  “We ​faced some excellent goaltenders at Hotchkiss, Berkshire, Westminster and Gunnery.  ​I think, also, we’re trying to play at a faster pace, and it is understandably a struggle to get our timing right offensively. Things ​did ​seem to come together nicely for us at the PKO.  Our players were executing many of the ​subtle ​things we had​ been stressing during the practice ​sessions leading to the tournament.​ We certainly have had some puck-luck, too!”

At the Patsy Odden Tournament, Kent’s potent offense was led by senior Lizzie Gross, junior Cec Ehrhard and new sophomore Millie Rose Sirum. In the wins over Tabor (undefeated at the time) and Taft, five different players lit the lamp.

“We fell a bit short last year in the PKO final against Loomis after leading the game in the final minute of play, Rousseau said.   “We believe that there was a little unfinished business for many of the girls in the locker room.  Heading into the ​week, we truly felt as though it was anyone’s tournament, ​as ​all eight  teams are very strong.  We knew that we were going to have to play our best in order to win.  The girls were disciplined and certainly focused on obtaining this goal.”

Things won’t get any easier for Kent after Christmas break, as on January 6th, they host Nobles.

The big question this week is who is #2? Games between the top teams, especially at the Harrington Tournament, have been very competitive. Lawrence Academy beat St. Pauls, which beat Nobles, which beat Lawrence. BB&N beat Williston, which beat St. Mark’s, which beat BB&N.

Since Nobles (6-1-1) did emerge as the champion​ at the Harrington Tournament, downing ISL rival BB&N in the final, 5-1, the Dawgs will claim the #2 spot in this latest rankings.

Tabor (7-1-0) stays firm at the #3 spot, rebounding from the big loss to Kent with wins over Andover (3-2, OT) and Hotchkiss (3-0). The Seawolves first game after break? a trip to Williston in what should be another close battle.

#4 St. Paul’s also rebounded from the loss to Lawrence with Harrington Tournament wins over Nobles, Westminster and Williston. A road trip to Lawrenceville and Hill School welcomes St. Paul’s back from break.

Preseason #1 New Hampton (8-2-0) is at #5. The Huskies fell to surging D2 power Vermont Academy in the finals of the Watkins Tournament this past weekend. New Hampton returns from break to play Albany Academy.