Hoping to be in the playoff mix in Division I is Berkshire (11-10-4), which returns a good group from last year’s club.

A trio of seniors – Maggie Curran, Claire Lemker and Antonia Matzka – are back on the blue line for coach Becky Zavisza. New sophomore Harley Frechette brings her talents to the defensive group.

In goal, the Bears have returning junior Jaime Allan and freshman Annie Hauser to do the job.

At Brewster Academy (7-14-2), Maeve Connelly takes over as head coach at her alma mater and is looking for her team to work hard.

Up front, senior Maddy Cunningham and junior Emily Erne will be counted on for offensive production. Newcomers who should contribute right away are sophomore Sydney Fascetta and freshmen Megan Olszewski and Kayla Proia.

Junior Kate Nice is a solid holdover blueliner for the Bobcats. New junior Kaylyn Stoddard will have a key role.

In the nets, returning senior Jordan Carrier will be pushed by new junior Sarah Street.

It was an uncharacteristic sub .500 mark last winter for Choate (9-12-0). Coach Nicole Stock feels her team needs to finish the season stronger than the Wild Boars did a year ago. “We need to be ready for the grind and win the games we must win,” she said.

Senior Christina Schuler will power Choate’s offensive attack, while senior Emily Atkins is the leader on the blue line.

Senior Cameron Leonard is a returning goaltender. A newcomer ready to click right away is senior Ellen Arena, who played at Northfield Mt. Hermon last season.

Valerie Bono returns to her alma mater Cushing (1-22-4) and is fully committed to turning the program around quickly.

Helping in that regard up front will be seniors Blossom Truel and Kristina Cheverie, returning forwards for the Penguins. Newcomers ready to jump right in are sophomore Margaret Sullivan, junior Ally Frechette, freshman Jenna Viglione and sophomore Mia Sacco.

The goaltending duties will fall on returner Chiara Pfosi and newcomer Sarah Potter.

Deerfield (10-9-1) doubled its Division 1 wins last winter with a young club, most of which returns, including five of the team’s top six defensemen. If the Big Green can eliminate defensive zone mistakes and get production from all of their forward lines, they could see a lot more improvement this year.

Seniors Meghan Halloran (committed to Williams) and Jenna Greenbaum will be key components of the offense, along with returning junior Mary Edmonds. Freshman Christina Halloran hopes to step right in to the offensive.

Freshman Olivia Mikesell will battle for time in the Deerfield nets.

Another team looking to take a few rungs up the ladder is Hotchkiss (6-15-3). The Bearcats will need to play strong and consistent two-way hockey.

Senior Grace Schreiber and sophomore Maddie Rego will lead the Bearcats on defense in front of junior goaltender Lindsay Reed.

Coming off a superb campaign, the ingredients are there again for another great season for Kent (19-3-1), which should have even more depth this winter.

New senior Becky Dutton and returning junior Carly Denora will handle the goaltending for the Lions.

A strong, deep forward group will be a key at Division I finalist Loomis Chaffee (22-4-1). If the Pelicans can get solid play from a young defense and strong goaltending, they will be a force again. 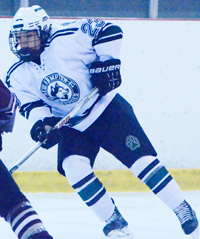 New Hampton (22-6-4) burst on the scene last winter as a serious New England contender and this year will be the same, with a potent lineup and talent at every position.

In goals, senior Cierra San Roman is ready for a big campaign for coach Craig Churchill.

An improved offensive attack should be in the cards for Northfield Mt. Hermon (9-15-3), which returns a good group from its forward lines.

Defensively, junior Steph Voge is back and will be a stalwart. Sophomore Alisa Canney moves back from the forward ranks to fortify the blue line for coach Ted Kenyon.

The Hoggers return a pair of experienced goalies in juniors Amanda Aalto and Grace Smith.

Phillips Andover (15-3-5) came out of nowhere a year ago and earned a playoff spot. With a solid core back and a talented incoming group, there will be no sneaking up on anyone this winter. The Big Blue are deep and talented.

Phillips Exeter (10-11-4) was a tough opponent last winter, and should be again this year.

Returner Brittni Chapman is vital to the defensive success for the Big Red. Freshman Camryn McCrystal will fight for the starting goaltender’s job.

It was a struggle last season for Pomfret (1-15-2), which won just one contest. New head coach Samantha Slotnick hopes to get the program back on the winning track soon.

Junior Angelica Mushenko will be crucial to any offensive success for the Griffins.

Junior Taylor Ettore is a returning blueliner, to be joined on the blue line by post-grad Kat LeFebre and freshman Grace Arsenault.

Probably the best team not to make the playoffs last winter, Tabor (15-5-4) returns nine of its top 10 scorers, which doesn’t bode well for its opposition.

The forward lines are highlighted by a handful of D1 commits. Juniors Kelly Browne (38 pts) and Olivia Finocchiaro (20 pts) and Jillian Fey (16 pts) have all committed to Boston College, while Martha Peppes is bound for UNH. Newcomers providing solid offensive depth are Anne Berry and Cindy Giandomenico, both transfers from Southfield School.

On defense, senior Jacqueline Leone has committed to Colgate. Taylor Matherson (18 pts) will go to Dartmouth. Those cornerstones will be joined by talented newcomers Julia Schiffman, Maddie Maloney and Julia Shaunessy.

A strong finish to last season has Taft (10-8-3) excited for the upcoming year. The Rhinos hope to battle for a playoff spot this winter. 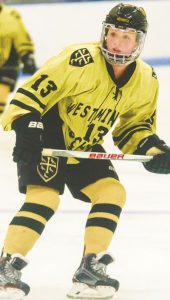 It has been an up-and-down last couple of years for Westminster (9-11-2). A New England D1 title two years ago, and then a sub. 500 mark last winter. The Martlets look to get back in the mix.

Newcomers looking to do the job include Lauren Ferriaulo, Abby Munger, Megan Rittenhouse and Jenny Guider.

Graduation hit 2016 New England semifinalist Williston (21-2-1) hard, so the returners will need to fill those shoes if the Wildcats can return to the post-season.

The offense will be built around the junior group of Gabbie Jones, Tori Palumbo, Marielle McHale and Elin Blomquist, and sophomores Caroline DiFiore, Kate Holmes and Maura Holden.

Expect the Wildcats to have a group of solid newcomers as well.

Former assistant Laura DiCarlo has moved up to the head coaching position at Winchendon (6-21-2) and hopes her club can create some more scoring opportunities.

Up front, seniors Shelby Foran and Jayden Young are top returners for the Wapiti. New junior Marianna Rajala and freshmen Mikayla Walsh, Makenzie Shandley and Emma Landry should help the cause as well.

Senior Giana Savastano, a Providence commit, will be an anchor of the Winchendon defense. Freshman Julia Holmes will look for solid minutes.