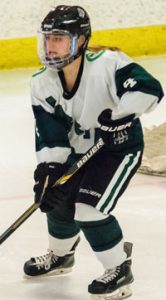 Strong in all areas of the game, the Cougars will be in the running for another CCL title, and have the potential to make a deep run into the post-season. They did win the 2016 Mass. D1 state title.

With the most players expected at pre-season tryouts in many years, things are very positive at St. Mary’s, which returns a good group from last winter’s playoff club.

All Leaguer Mady Hentosh (22 pts), a junior, will anchor things defensively for coach Frank Pagliuca. Sophomore Kelsey Sullivan will log plenty of minutes, while senior Rose Callahan will be a solid blue line contributor as well.

A key will be goalie play, as St Mary’s will have a new starter that will emerge from preseason camp.

The Cougars have a new bench boss in former player Kristin McKenzie, who inherits what will be a young team looking to rebuild. McKenzie is expecting good things from her returning cast.

Junior defenseman Molly Simmons projects to be a key player for the Cougars. Freshman goalie Quinn Mustone looks to earn the starting job between the pipes.

After many years as an independent, the Warriors join the Catholic Central this winter and look forward to the challenge with the tougher schedule. Expect Matignon to be a different team this winter, but a little more balanced.

Junior starter Dana Smullen (1.34 gaa) is back in goal as well.

With virtually everyone back from last year’s tournament club, expect the Bishops to be a tough team to play against, one that will feature good team defense from the goal out.