In a game that featured great up-and-down action, some heavy hitting and excellent defensive play, Red Army was able to come away with the win, scoring in overtime to edge past the Blue Hawks, 4-3, in a Massachusetts Final Four semifinal Saturday at Canton Ice House.

Sean Garrity was the hero for Red Army, converting his own rebound from the doorstep 3:39 into extra time, with both teams playing four aside.

It capped off a frenetic last several minutes on the game. With the scored tied 2-2 late into the second half, Blue Hawks forward Nick Fondo put his team in front for the first time with 3:07 left in regulation. 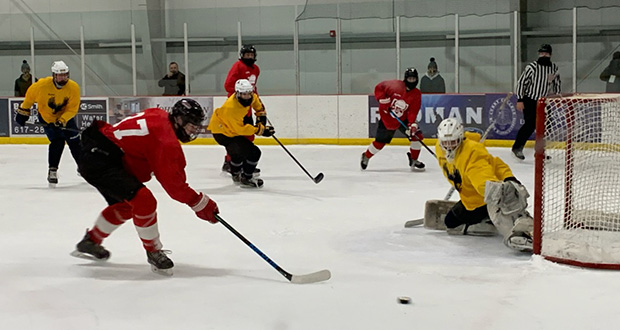 Red Army’s Aidan Brazel just misssed firing this one home in the first half, but was able to net the game-tying goal late in the second half as Red Army took a 4-3 OT win.

Army won the ensuing faceoff and broke out on a two-on-one break. Lars Osterberg slid a nifty pass across to Aidan Brazel, whose hard wrist shot was stopped initially by Blue Hawks goalie Kevin McGrath, but the puck somehow slid across the goal line according to the referee for a huge shorthanded tally to knot things up at 3-3.

In the overtime session, the Blue Hawks couldn’t get the puck out of their zone on the left wing side. The puck got sent in deep on a nice look by Paul Forbes, where Garrity collected it and moved in front. McGrath stoned him on his first effort but the forward was able to sneak home the rebound for the game-winner.

Red Army will now face the Cardinals in Sunday’s championship game, back at the Canton Ice House.

Both teams would score two goals in a fast-paced opening half. 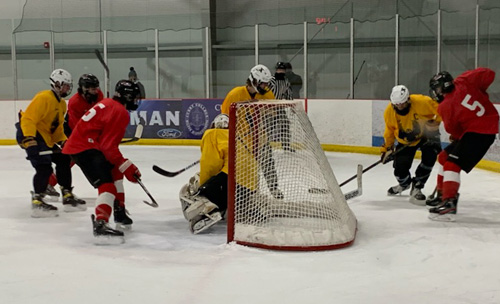 Red Army drew first blood, taking a 1-0 lead just 3;34 in when Forbes skated over the blue line and buried a well-placedwrist shot.

Just over three minutes later, the Blue Hawks evened things up. Brock Casey scored it, moving in from the right side and whistling home a wrist shot, far-side, bar down past Red Army goalie Theo Jacobs.

At 15:38, Red Army grabbed a 2-1 lead. Off an offensive zone draw to the left of McGrath, the puck worked its way back to Tommy McNally at the blue line. The defenseman’s well-placed wrister through a screen of players in front found the top corner.

The Blue Hawks got that one back with a minute to go in the half.  Forward Jack Silva carried the puck off the right wing boards, deked a defensman, moved in front and slid the puck home along the ice to make a 2-2 game. Jake Curley and Shane Spinale were credited with assists on the play.

In the second half, both teams were called for major penalties, just 19 seconds apart, but the extended 4-on-4 play it created didn’t produce any goals.

It stayed 2-2 until, with the Blue Hawks buzzing, the puck found its way to Fondo’s stick, and he quickly shoveled it home just off the left post.

The Blue Hawks will face Clergy in Sunday’s consolation game.