When the Eastern Hockey League Premier Division wrapped up its showcase in Worcester, Mass. back in January of 2020, nobody suspected that it would take nearly two calendar years for the next one to take place.

But now, 620 days later, the EHL and EHLP are headed back to Worcester to pick up where they left off.

As teams arrive in Massachusetts this weekend, it is safe to say this showcase will mean more to the players, coaches and staff members across the league. The return of the EHL Showcase Series represents another step towards normalcy after the league (and by extension the world) was upended in March of 2020.

“I’m beyond excited for the return of the EHL Showcase Series, and the chance for our players to make an impression on numerous scouts that will be in attendance this weekend,” said EHL Associate Commissioner Neil Ravin. “These events are what sets us apart, and it feels great to have them back.” 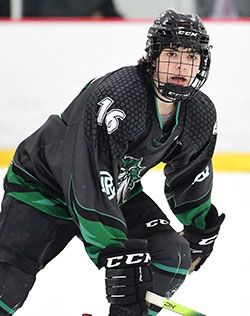 The players are excited too, such as Colin Bella of the Connecticut RoughRiders. After leading the league with 25 goals last season, he is a prime example of a player who can showcase his talents in front of collegiate coaches in search of an NCAA commitment.

“You’re really playing for your future here, it’s a completely different kind of energy when you’re in a showcase and not a regular game. You’ve got the whole league there, every player and coach is watching your game, so it’s really big and important to play well,” Bella said.

The showcase runs Thursday Sept 30 through Sunday Oct 2, and each day will have several exciting matchups. Here are some games to keep an eye on.

Walpole Express vs. Railers Jr. Hockey Club – 11:00 a.m.: The first official game of the 2021-2022 Showcase Series. The Railers are off to a 3-0-0 start, and they look to keep that going against Walpole, who recently picked up their first win of the season against the Connecticut Chiefs.
Boston Jr. Rangers vs. Valley Junior Warriors – 11:10 a.m.: The Valley Jr. Warriors played their way into the EHL power rankings with a 3-1-0 start to the season, and they enter the Showcase going up against the defending champion Boston Jr. Rangers. While the Jr. Warriors have scored 20 goals in their first four contests, the Jr. Rangers are getting a boost with the return of 2021 goaltender of the year Nathan Mueller, who is expected to play in the showcase.

Team Maryland vs. Seacoast Spartans – 2:00 p.m.: Maryland and Seacoast sit atop of the South and North Divisions respectively. Nick Graziano, who will likely play one more game before the showcase, is second in the league with 12 points (5g, 7a) through five games. There is no doubt he will be a player college coaches will keep their eyes on.
New Jersey 87’s vs. East Coast Wizards – 4:10 p.m.: The East Coast Wizards are first in the East Division with a 3-0-0 record, while the defending regular season champions are second in the South with a 3-1-0 mark. New Jersey hopes its offense will return to last year’s form, coming off a 5-1 win over the RoughRiders, while the Wizards have rock solid goaltending on their side. Matt Gover and Jake Essensa are first and fourth in the EHL with .980 and .960 save percentages respectively.

Vermont Lumberjacks vs. East Coast Wizards – 10:00 a.m.: As mentioned above, the Wizards have been very strong on the back end to start the season. They’ll have another challenge on Saturday as the Lumberjacks have put up 33 goals through five games. Louis-Joseph Guernon leads the league with 14 points (5g, 9a) through five games as his team will look to overtake the Spartans for the top spot in the North Division.

New York Apple Core vs. Boston Jr. Rangers – 12:00 p.m.: While the Rangers have a strong goalie tandem in Chris Jackson and Nathan Mueller, Apple Core has a terrific goalie of their own in Bernard Jackson. He has a .942 save percentage through five games and has stopped 106 of the 113 shots he’s faced in his last two contests. Expect a goalie battle on Sunday afternoon.

Railers Jr. Hockey Club vs. Seahawks Hockey Club – Oct 1 6:00 p.m.: Three teams in the East Division remain undefeated, and this matchup features two of them. Coming off a run to the EHLP championship game last season, the Railers hope to shine on home ice in this first showcase.
New Jersey 87’s vs. Valley Jr. Warriors – Oct 2 10:00 a.m.: The defending champions are off to a 3-1-0 start, but the Valley Jr. Warriors are right there as one of the top teams in the EHLP. Off to a 3-0-0 start, the Jr. Warriors have scored six or more goals in each game. Defense may be optional for this game.
Important Notice: With so many games on tap over the next four days, Worcester Ice Center will be enforcing a mask mandate for all fans and staff members in the arena. Plan accordingly for those attending the showcase.