At the start of the year, all things pointed to a banner season for Woburn (21-2-2), bringing back a solid nucleus from a team that was playoff-bound the year before. The Tanners did not disappoint.

They won a co-championship in the tough Middlesex League Liberty Division, and then saved their best for last, a solid, two-way performance in a 3-1 win over Needham in the MIAA Girls D1 state final at TD Garden.

Needham (22-1-2) had entered that title game undefeated and as the top-seed in the tournament. Despite a small roster, the Rockets had plenty of talent as they blasted to the Bay State League Carey Division crown. 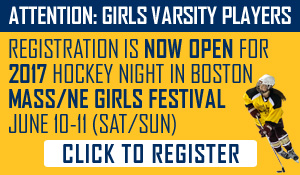 #3 Reading (18-4-1) was one of two teams to beat Woburn and shared the ML Liberty Division title with the Tanners. Top scorer Michaela Boyle (46 goals) is one of just two seniors graduating, as the Rockets should be tough again next winter.

#4 Austin Prep (16-4-2), the Catholic Central League champions,  spent a good portion of the regular season ranked #1 in Division 1. The Cougars were upset in the quarterfinal round by Masconomet, but look to return a good group for next season.

#5 Beverly/Danvers (17-2-3), winners of the Northeastern Hockey League, also fell victim in the post-season to Masconomet.