And that’s a wrap.

The Mass. Division 3 Eastern Mass. season came to end as Old Rochester/Fairhaven did everything in its power to hang with Central power Shrewsbury in the Division 3 state final.

It wasn’t meant to be for the Bulldogs, but they played super competitive despite injuries and never gave up, scoring early in the third period to make it interesting.

Their 3-1 loss in the state final at TD Garden of course does not overshadow a tremendous season. In the shadows of Hanover and Norwell for the last few years, the team stormed through the South and earned its berth in the finals with a win over Lowell.

Rockland we felt was the team to beat in the tourney. And Old Rochester/Fairhaven did just that, ending the other Bulldogs amazing season at 21-2-3.

Hopkinton had another strong campaign, finishing with 18 wins and falling to the Eastern Mass. champs in two overtimes in the South quarters.

Hanover, our perennial No. 1 all season, fell to Rockland in a shootout. It was a premature ending for a team that had back-to-back state titles on its radar.

Ok, we know putting Lowell No. 5 when it had not made an appearance for us all year is questionable. But we’re big fans of performances in the clutch, and that’s just what the Red Raiders did, beating No. 1 Swampscott en route to the North title. 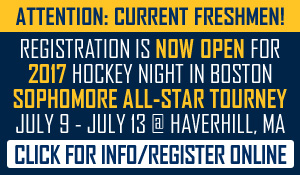 Latin Academy and city rival East Boston are pretty much interchangeable, but we’re going naturally with the team that won in the postseason. Latin beat Eastie in two overtimes, then fell to Lowell in the North finals.

Nantucket only lost one game and made one heck of a run in the South tourney. It beat Ashland and Norwell before falling to Rockland.

Swampscott took a big dip for us after being ranked first among North teams for most of the season. The No. 1 seed didn’t win a game in the postseason, falling to the eventual North champs in their opening round.

Norwell started slow but came on strong, finishing with 12 wins.