* Note: Results from Connecticut conference tournament games were not factored into the final records or rankings.

We will never know if Darien could have finished No. 1 in Connecticut at the end of the postseason. The state’s Division 1 boys’ hockey tournament never got off the ground, canceled because of the coronavirus outbreak.

But the Blue Wave will finish as the top-ranked team in the final HNIB News Connecticut Division 1 rankings. Darien closed the regular season with wins against Notre Dame-West Haven and Trumbull.

Fairfield Prep remains in the No. 2 spot in the final rankings, followed closely by No. 3 New Canaan.

Despite its late loss to Darien, Notre Dame-West Haven stayed in the No. 4 spot, with Greenwich rounding out the top five.

No. 6 Fairfield Warde/Ludlowe and No. 7 Notre Dame-Fairfield (despite the loss to Fairfield Prep) each moved up a spot along with No. 8 Xavier.

Simsbury jumps back into the final rankings at No. 9 thanks to a late victory against Ridgefield, which dropped to No. 10. 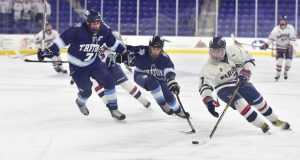 Mass. Boys HS Hockey – Division 2 Top 10: No Change At The Top In Slow Start To Season 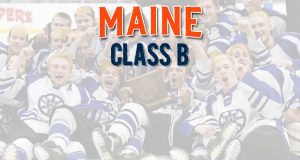