Twenty-one teams make up the field in the MIAA Division 3 South sectional, led by top seeded Hanover (19-0-1). Preliminary round action gets underway Monday. Here is a look at the teams, by seed: 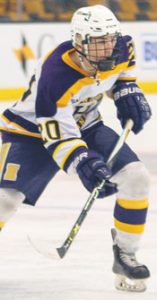 #1 Hanover (19-0-1). The lone unbeaten team in all of Eastern Mass. Division 3, the Indians head into the postseason loaded with confidence. They are averaging better than five goals per game and have allowed just more than one each contest.

Heading into the postseason with an 18-game winning streak is preferable, and that’s what Hanover has done. It’s allowed one goal in its last four games.

#3 Rockland (17-2-3): No one’s overlooking the Bulldogs in the South, which also averaged more than five goals per game. The team had a 15-game unbeaten streak this season that was snapped by Plymouth South.

#4 St. John Paul II (17-4-0): Another five-goals-per-game team, the Lions of Hyannis come into the postseason riding a six-game winning streak. The competition in that streak was not tough, however, and John Paul will meet the winner of Foxboro-Ashland in its first-round game.

Pacing the scoring attack for the Lions are senior Jimmy Manning, senior Corey Weeks and sophomore Joey Manning. Senior Billy Dwyer anchors the defense, while Henry Klimm project to be in goal.

#5 Bourne (14-4-2): Yet another team that has put up more than 100 goals this season, the Canalmen sail into the postseason after one of their best regular seasons to date. Perhaps their two most impressive “wins” were ties: 4-4 with Rockland and 4-4 with Old Rochester/Fairhaven, last year’s Division 3 Eastern Mass. champions. But they’ve had some losses they’d like to forget, and a strong postseason run is a nice opportunity to do so.

The Warriors of Randolph need to shoe up some things on the defensive side, however, allowing 88 goals this season. An 8-0 loss to Ashland in the latter part of the season is a bad look, but the team bounced back to close out their season with two victories.

The team needs to get back to its early-season prowess after closing out the year 0-2-1.

#13 Foxboro (10-8-2): The Warriors have had a competitive season. Only two games — 8-1 losses to Bellingham and Canton — got away from them. They had a five-game winning streak down the stretch and finished 6-3 in their last nine. Brendan Tully is a goal-scorer to watch.

#14 Coyle & Cassidy (8-6-5): We’re going to give these Warriors — new to Division 3 this year — the Sleeper title in the South. The team played mostly an upper-division schedule and held its own. In key Division 3 games this season, Coyle & Cassidy was 1-2-1, losing to Hanover and Rockland in competitive games and tying and beating Bishop Stang. One big blemish: it lost 9-2 to defending D3 champs Shrewsbury. Juniors Drew Arpin and Ben Tufts are key forwards.

#15 Dover-Sherborn (10-8-2).: Dover-Sherborn is hoping to bring its A-game into the tourney and starts with Upper Cape Tech in a preliminary-round game. The team can play for sure — it beat Holliston, 4-3, Feb. 14. It played Holliston competitively in their other game (2-0 loss) and fell to Hopkinton twice.

#16 Sacred Heart (10-9-1): Sacred Heart has lost four of its last five games heading into the postseason. It will get the chance at revenge when it meets Abington in the preliminary round of the playoffs. Abington beat Sacred Heart, 5-3, in Rockland and the two meet again Monday in Buzzards Bay.

#17 Abington (9-8-3): Abington comes into the tourney with a heckuva lot of momentum: six of seven victories. That streak began after three straight losses: 4-2 to Whitman-Hanson, 5-3 to Norwell and 7-0 to Rockland.

#18 Upper Cape Tech (10-9-1): Upper Cape Tech comes into the tourney with the same predicament as its Mayflower League counterparts. The competition hasn’t exactly been stiff, certainly not stiff enough to prepare for the shark tank that is the South. But the Rams did win three of their last four which is naturally some good momentum heading into the postseason.

#19 Attleboro (9-9-2). The Bombardiers  come into the postseason with just one loss in their final five games. The team will certainly be prepared for Division 3 after playing in a conference (Hockomock Kelley-Rex) that has three Division 1 teams and two from Division 2.

#20 Ashland (9-9-2). Jackson Hornug leads the Clockers with 18 goals and 11 assists. The team will need to support him in the tourney if it’s to have a successful run. Ashland went 0-3-1 in its four games with the top teams in the Tri-Valley league (losing twice to Hopkinton; tieing and losing to Holliston).