Dom Nicastro
Dom Nicastro is a veteran sportswriter and journalist whose credits include the Gloucester Daily Times, Salem News, Lawrence Eagle-Tribune and Boston Magazine. This is his seventh season working for Hockey Night in Boston Magazine. He covers boys Eastern Mass. Division 3 and Rhode Island. He can be reached via email at [email protected]

Johnny Baker scored on a power play with 1:10 left in the game. He had two goals, and Dylan Shine added the other. Owen Goulette and Shawn Spring had Lowell’s goals.

The Clippers clinched at least a tie for the South Shore League title and a 23rd straight post-season appearance. Luke Norton and Sam Williams scored two goals each, amd Griffin Vetrano, Sam Fettuccia, Harrison Reed and Justin Spataro each had one. Sophomore Sean Ennis earned the win in goal.

Junior Sean Walsh scored four goals and even had the assist on the other goal — junior Kyle Rogers goal.

Juniors John O’Brien and Cooper Griffin each had a goal, and senior captain Matt Paolatto added a goal and a helper. D-S/Weston junior Zach Korbin had the shutout. 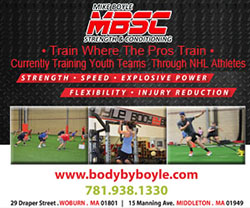 Senior Evan Gormley and sophomore Nick Blonde each had a pair of goals and a pair of assists. Eighth-grader Logan Murphy had four assists. Jack Fitzpatrick had a hat trick for the losers.

Matt Ruggiero, Sam Taverna and Jake Dagesse scored the goals for the winners.

Seniors James Lester and Austin Starr had a goal each as the Whalers blanked the Dolphins on the island. Lester didn’t break the ice until four minutes into the second period, off an assist from sophomore Marsh Hickman, and Nantucket (4-6-1) clung to that lead until Starr’s empty netter with 35 seconds to play.  Sophomore Ben Murphy came up with a few key saves to preserve the shutout.