By this time next week, the divisional races will either be all but over – or two of them could remain very much in contention.

The second-place Northern Cyclones (28-8-0-0) shaved two points off the New Hampshire Junior Monarchs (30-5-1) lead to close to within five points. Each team has eight games remaining, including two head-to-heads: this Friday and the season finale on Feb. 23.

Both teams have been smoking since New Hampshire’s mid-December decision of the Cyclones. In the span, New Hampshire has gone 11-1-0-0 with the Cyclones checking in at 9-1-0-0 – a .900 pace during which they actually lost ground in the race.

New Hampshire has been off since last Friday’s 5-2 win against the Boston Junior Rangers in which Shawn Nelson had a goal and two assists.

Meanwhile, the Cyclones fought off a spectacular 58-save performance by Anthony Giordano to defeat the Washington Junior Nationals, 2-0, on goals by Weston Moon and Grant Gallo.

The Bobcats also hold a game in hand that could come in very handy down the stretch.

The Philadelphia Little Flyers(21-9-2-3) took advantage of multiple games in hand to open a six-point over their only viable pursuer, the New Jersey Rockets (19-15-2-1).  And, the Flyers still have played two fewer games.

The EHL will welcome the Vermont Lumberjacks for the 2014-15 campaign, returning Junior hockey to the Green Mountain State after a two-year absence. The ‘Jacks will be based out of Leddy Park Arena in Burlington, VT.

“The Burlington area is a proven Junior market with strong local support that will offer our student-athletes the stage on which to perform in front of our target audience,” said EHL Director of Hockey Operations Mark Kumpel in a release on the EHL web site. “Burlington’s proximity to NCAA schools like St. Michaels, Norwich, Middlebury, Plattsburg and the University of Vermont, and the commitment of a strong ownership group, will provide players and the league the opportunity to thrive.”

Former Green Mountain Glades head coach Chris Line will be at the helm for the Lumberjacks’ first season.

“I am very excited to have Junior Hockey back in Vermont,” said Line.  “I look forward to helping the Lumberjacks establish themselves in such a great community and strong league. We will strive to produce top-notch citizens and players on their journey to college hockey.”

The EHL’s 1993 Prospects Game will be held tomorrow at noon at The Edge Sports Center in Bedford, MA (weather permitting). The game will consist solely of 1993 birth year players, who are in their final year of Junior hockey eligibility, and undecided about their NCAA hockey plans.

PLAYERS OF THE WEEK 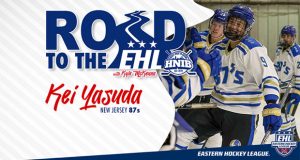