It’s been a busy week for the Northern Cyclones, who had four players make college commitments in the past eight days. * UPDATE: It was just announced today (Jan. 24) that Cyclones defenseman, and captain, Dalton Carter, orginally committed to Utica, is now headed to UMass-Lowell of Hockey East. And, he will join the Riverhawks program immediately.

Forward Kevin Valenti is bound for Division 3 Utica of the ECAC West; forward Tim Baylis signed with Division 2 University of Southern New Hampshire of the NE-10; and defenseman Bryan Dallaire will head to Division 3 SUNY-Plattsburgh.

Valenti, a 5-11, 175-pounder out of Queensbury, NY, is running away with the EHL scoring title in his first full season with the Cyclones with 30 goals and 61 points.

Each player remarked about their selections and thanked coach Bill Flanagan in posts to the team web site:

VALENTI:  “I want to thank Coach (Flanagan), for helping me accomplish my goal of getting committed to a great school like Utica College. This is an opportunity that I am very excited about and I can’t wait to get on the ice next season. Utica College is a school that I have had my eye on for a long time and once I saw the campus and a hockey game, I knew that was where I wanted to go.”

DALLAIRE: “I am honored to be a part of such a great program here with the Cyclones and I am looking forward to going to another great program at Plattsburgh. After playing for the Cyclones for just one season, I feel that Coach (Flanagan) has prepared me to succeed on and off the ice at the college level.”

BAYLIS:  “I couldn’t be happier with my selection and I am excited to be a Penman. I am very grateful for the Cyclones organization for preparing me for next season and helping me get to this point in my career.”

Meanwhile, New Jersey Rockets scoring leader Mike Gillespie took to Twitter on Tuesday to announce his acceptance of a full scholarship to play for Division 1 Niagara. Gillespie ranks second in league scoring behind Valenti with 13 goals and 47 points. The Purple Eagles are members of the Metro Atlantic Athletic Conference.

NORTH: The New Hampshire Monarchs (27-5-1) continue to hold a comfortable leas on second-place Northern Cyclones (24-7-0-0), who will be looking to cash in on two games in hand to tighten the race. The Boston Bandits (18-9-3-2) are a distant third.

PLAYERS OF THE WEEK 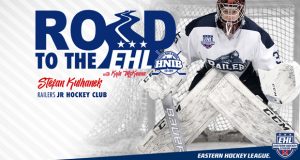