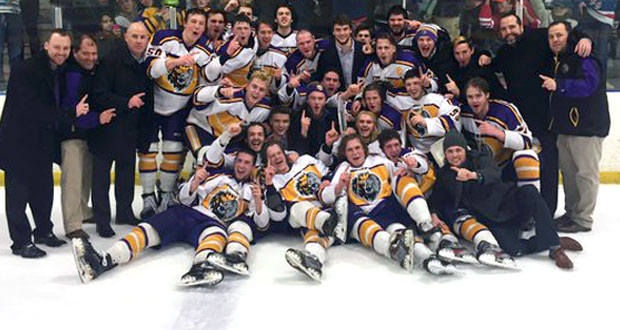 THE NEW HAMPSHIRE MONARCHS are the 2016 EHL Premier Champions after a 3-game sweep of the Philadelphia Little Flyers in the championship series.

When the rosters froze on February 10 – essentially locking in each team’s lineup for the remainder of the season –the New Hampshire Jr. Monarchs caught fire.

First the Monarchs closed the regular season with six straight wins. Then they proceeded to win 9-of-10 post-season games, capping their surge with a three-game sweep of the No. 1 seed Philadelphia Little Flyers in the Eastern Hockey League Premier Division’s championship series.

And, the Monarchs did it the hard way, winning the first two games of the series at The Ice Works Complex in Aston, PA before returning home for the title-clinching 4-3 OT win on March 25 at Tri-Town Ice Arena in Hooksett, N.H.

Forward Connor Powell and goalie Kyle Madore led the way for the Monarchs. Powell was the playoffs’ leading scorer with 18 points, including the OT clinchers against the Flyers. Madore was 9-1 in the post-season with a 2.16 gaa and four shutouts and turned back 87-of-90 shots while allowing just three goals in the championship series.

The Monarchs delivered a clear opening statement with their 4-1 win. Bennett converted a Scott Mulligan set-up at 1:02 of the first period and Derek Britner doubled the lead at 6:20 with Jake Schultz and Brian Greene garnering the assists.

Any momentum the Little Flyers hoped to garner from Oleg Potemkin’s goal that made it 2-1 at 6:22 of the second period was blunted 62 seconds later when Jewett restored the two-goal lead with a shorthanded breakaway strike. C.J. Valerian’s power play strike settled it at 7:32 of the third period, assisted by Batis and Bennett.

The Monarchs headed home with a two-game lead after Mulligan delivered the game’s only goal in the second minute of OT for a 1-0 win. Bennett and Valerian had the helpers while Madore earned the shutout with 25 saves. Sam Kany also had 25 saves in the Flyers’ cage.

The Monarchs completed the sweep on home ice, 3-2, as Powell delivered the winner at 14:32 of overtime. Madore had 35 saves.

New Hampshire twice came from behind in this one. Shawn O’Meara, from Ian Socrates and Jamie Bucell, provided the Flyers with their first lead of the series at 6:02 of the second period. Batis tied it a little more than two minutes later, assisted by Powell and Valerian.

The Little Flyers regained the lead, 2-1, on Tyler Pietrowski’s goal early in the third period. That lead stood until Powell tied it with 6:38 remaining in regulation, assisted by Batis and Alex Hopkins.

And so it went deep into the extra session until Powell ended it, completing a three-point night. Flyers’ goalie Brock Thompson was brilliant in defeat with 44 saves.