The Lumberjacks overcame a two-goal, third period deficit with four straight goals en route to a 5-3 win over the Boston Jr Rangers.

Davis Bone‘s second goal of the game, on a power play, snapped a 3-3 deadlock with 2:42 to play. Louis-Joseph Guernon, whose goal tied the game 3-3 with 5:04 left in regulation, added an empty net goal to seal the win for the Lumberjacks. Guernon’s tying goal came just 17 seconds after Frank Mondi closed the gap to 3-2.

Joey Schaefer scored all three goals for the Junior Rangers. 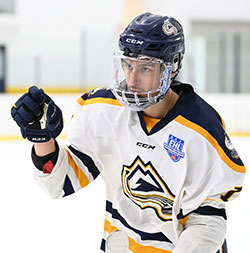 In the night cap, the Avalanche, who earned the At-Large bid to the Frozen Finals, jumped out to a 2-0 lead in the first period and led 5-2 in the third period before holding off the EHL regular season champion New Jersey 87s, 5-4.

Goals by Ryan Malko, Chris Aarons and Aden Hotchkiss gave the Avalanche a 3-0 lead before the 87s came back, as Jon Gabriel and Francis Kienzel netted goals to make it a 3-2 game.

Later in the second period Artem Mateichenko scored to put NH back up 4-2 and early in the third, Malko put home his second of the night to up the margin to 5-2.

The 87s battled back. Dylan Guitierrez notched a power play goal at 12:34 to bring NJ to within 5-3. Dante Terramani‘s off-angle shot went in with 29.5 seconds left to make it 5-4 but the 87s could not get the equalizer.

In Thursday’s action the Jr. Rangers and 87s face off at 4:30pm, while the two Wednesday winners – the Avalanche and Lumberjacks – will play at 7:15pm.