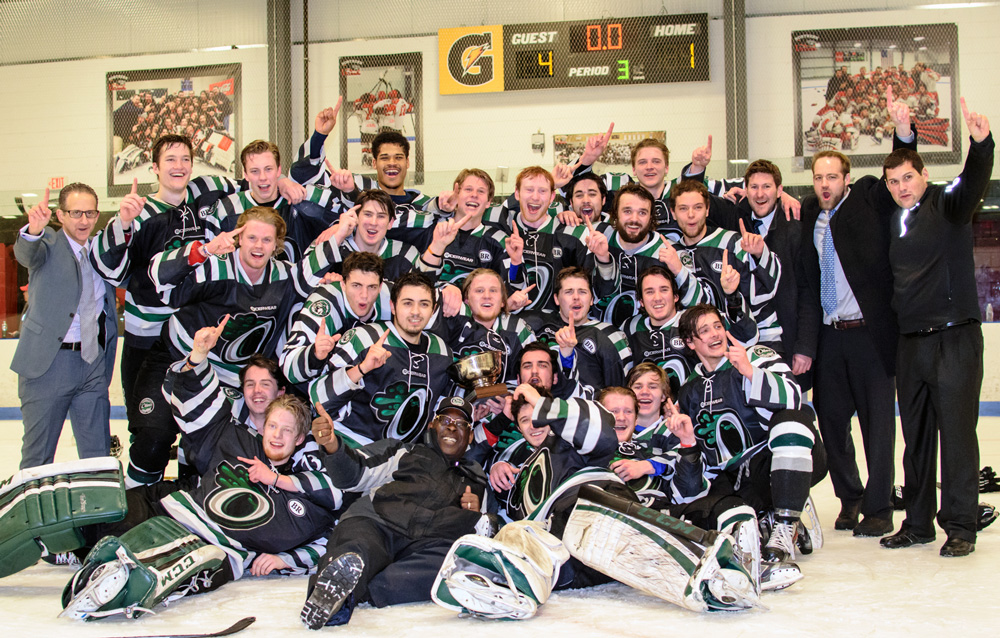 THE CONNECTICUT OILERS are the 2015 Eastern Hockey League champions.

Connecticut Oilers goalie Michael Tilford certainly saved his best performance for last, as the Traverse City, Michigan product made an amazing 64 saves in a 4-1 win over the host Northern Cyclones that gave the Oilers the Eastern Hockey League title Thursday night at Cyclones Arena.

The Oilers won the series three games to two, winning games four and five to rally from a 2-1 series deficit and knock off the defending champion Cyclones. 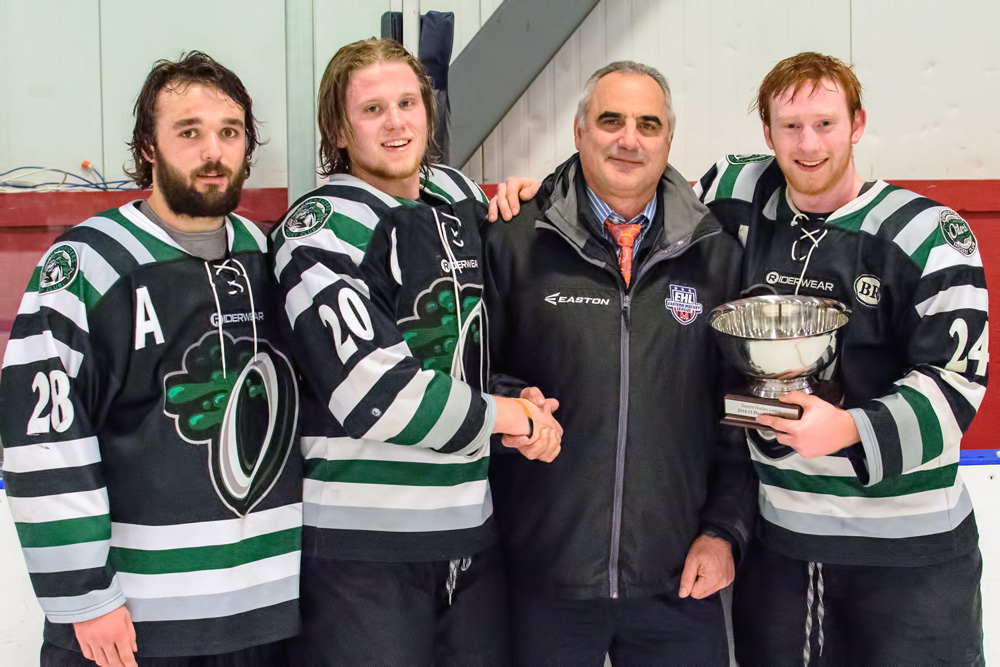 The win came in the Oilers third year of existence as a program.

“This organization has the utmost support for our team,” said Oilers head coach Eric Lind. “The amount of ice time we get, we are on the ice 2-3 hours a day. We have made tremendous strides within three years.”

“Winning is a by-product of hard work,” said Oilers president Ryan Hughes. “Winning isn’t our end-all, be-all. Our goal is to develop our players, improve them and move them on to the next level.”

The Oilers controlled play early on and grabbed a 2-0 first period lead. That seemed to wake up the Cyclones, who came in swarms the rest of the night. But Tilford stopped just about everything the Cyclones threw at him. 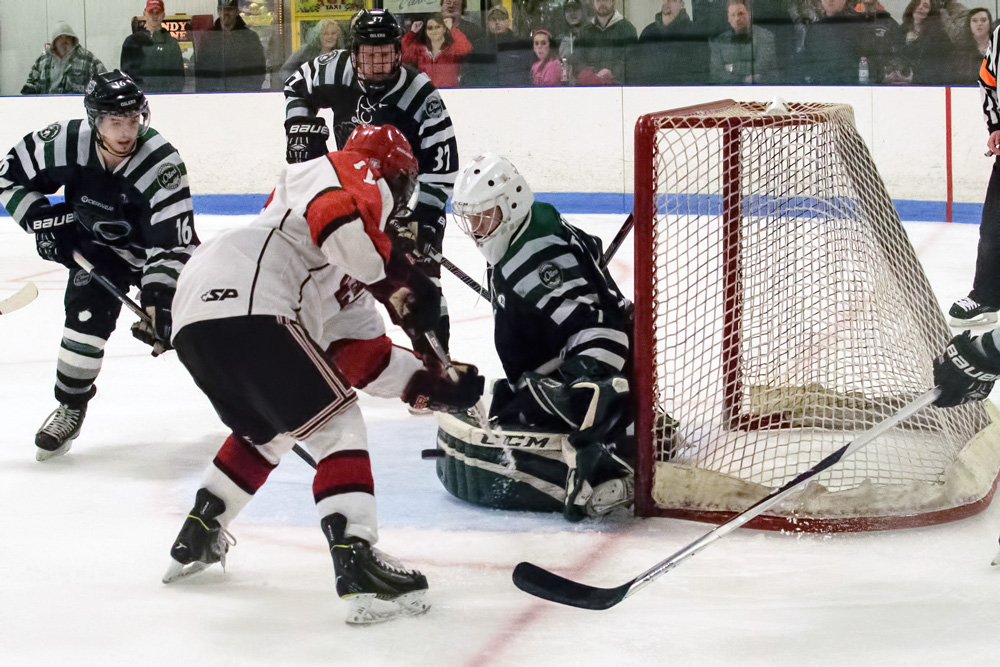 In the third period alone, Tilford made 27 saves as the Oilers had to kill off four penalties.

“He has such a tremendous work ethic,” Oilers goalie coach Ryan Hull said of Tilford. “All through the year. He put so much work into it.”

Connecticut struck first just 1:40 into the game, when on a power play, defenseman Alex Wilkinson, from the left point, made a nice pass across to Nick Jermain in the right faceoff circle, and Jermain whistled a wrist shot past Cyclones goalie Jimmy Poreda (29 saves).

The Oilers expanded their margin to 2-0 at 14:58, as Phil Kreuser snuck home a wrap-around at the right post after a shot from the point missed its mark.

The only time the Cyclones would dent Tilford’s armor came at 16:13 of the first period, as Aaron Bland put home a shot from the right side that somehow snuck past the Oilers goalie. 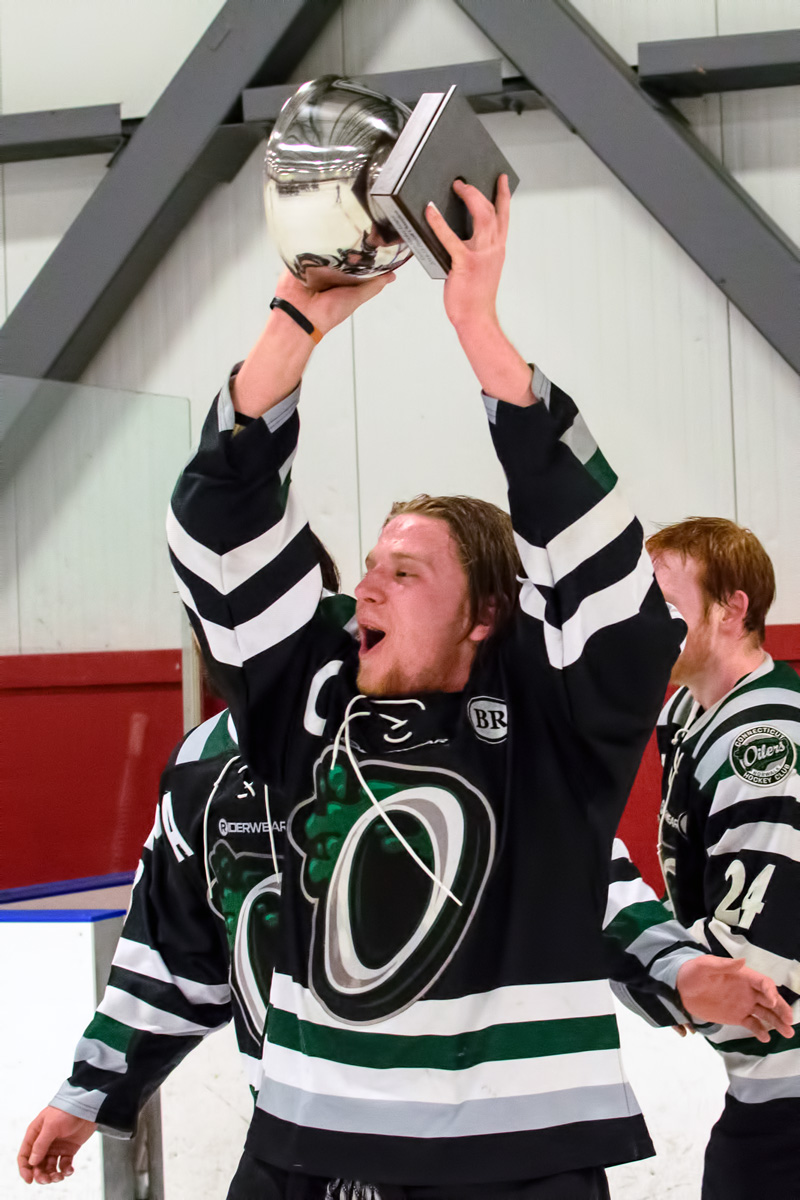 A key juncture in the game happened late in the second period. Northern Cyclones’ forward Joey Meehan wheeled to the slot and appeared to fire home a wrist shot to even the count at 2-2. But, the goal was disallowed due to what appeared to be an offside call.

And just 36 seconds later, Dejon Marsh skated down the right wing and fired a wrist shot that broke off Poreda’s glove and into the cage.

Instead of heading into the final 20 minutes in a tie, the Cyclones found themselves down 3-1.

Buoyed by those four power plays, the Cyclones were all over Connecticut in the final period, even pulling Poreda for a sixth attacker with five and a half minutes left, but they couldn’t score.

Lucas Bombardier put the finishes touches on the game and EHL title with an empty net goal with 58 seconds left.

“It was an all around team effort,” Lind said. “My hat is off to the whole team. We had tremendous leadership from our captains (Cam Cundy, Wilkinson, Bombardier). Tilford was unbelievable. He battled all game. His rebound position was excellent.”

The win came even with the news right before the game that two of the Oilers top players,  forward Ludvig Steenberg and defenseman Oscar Arfelt, both Sweden natives,  were ruled ineligible to play by USA Hockey due to an improper registration issue.

“I was very confident in the kids that moved in (to the lineup),” Lind said. “The other guys jumped in and did the job. All year, everyone on this roster played.”