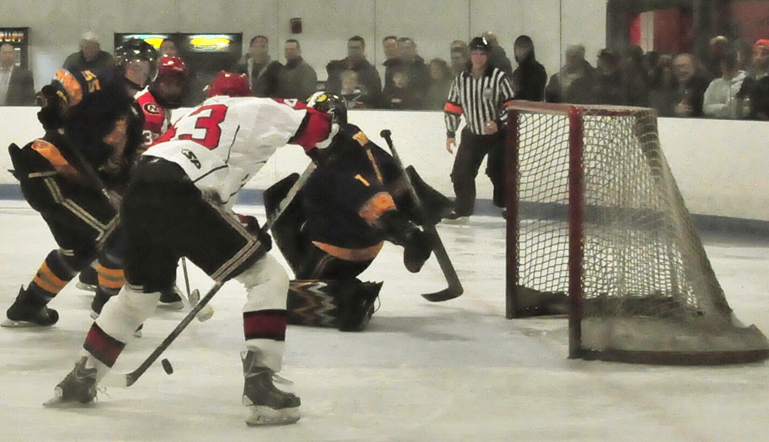 The Eastern Hockey League championship series is headed to a winner-take-all Game Five after the Northern Cyclones hammered the regular-season champion New Hampshire Jr. Monarchs, 6-1, at Cyclones Arena Tuesday night to even the series at two games apiece.

Game Five is set for Thursday night on the Monarchs’ home ice at Tri-Town (6 p.m.).

The Cyclones weathered a first-period assault by the Monarchs which saw the visitors pile up a 14-5 edge in shots but exit with only a 1-0 lead on Shawn Nelson’s goal midway through the period. Cyclones’ goalie Drew Weigman turned back 13 shots en route to a 35-save performance.

Momentum reversed completely in the second period as the Cyclones scored on four of their nine shots, including three goals in a span of 1:43 at the start of the period. Chris Zuccaro tied it at 34 seconds; Daniil Kulikov scored the game-winner at 1:55; and Weston Moon concluded the flurry at 2:17. Aaron’s Bland’s goal at 13:47 sent the Cyclones off with an insurmountable 4-1 lead.

Late third-period goals by Jeremy Young and Tim Baylis accounted for the final. Kulikov, Young and Baylis all had a goal and an assist as the Cyclones applied unrelenting pressure against the Monarchs’ EHL Goalie of the Year Jake Theut (29 saves) in the final 40 minutes.