The division boasted both Small School finalists a year ago, with St. Mark’s winning its second straight New England title. The league could have a handful of playoff clubs this year as well.

One could be Brooks (17-8-2), the 2015 Large School champion. The Bishops do have some scoring to replace from last season’s quality club.

On the blue line, the Bishops have back seniors Lewis Evans and Max Kahn, along with sophomores Owen Borek and Michael Hughes. New junior Paddy Mangan will help out.

In goal, senior John Trotto is a returning starter.

An upgraded schedule is already in place at BB&N (5-19-3), where new head coach Peter Russo, formerly a Brooks assistant, is focused on improving the program right away.

Freshman Gavin Fitzpatrick will battle for the starting goaltender’s job.

There is excitement at Groton (10-14-3), where a solid nucleus returns for coach Bill Riley.

A new junior, Thomas Steere, will be in the mix for the Groton goaltending job.

Improving its offensive output will be paramount if Middlesex (6-14-2) plans on rebounding from last winter’s sub-par campaign.

That task will be a focus of returning forwards senior Joe Feeney, an All League selection last winter, Will Thrun and Jake Goormo. New student Ethan MacDougall should fit in nicely.

Cornerstone defensemen for the Zebras will be seniors Jake Carmel and Lorne Carter.

With Derek Goguen having graduated, the goaltending duties for Joe Mallen will fall on the sophomore duo of Joe Stanizzi and Corey Sarazin. 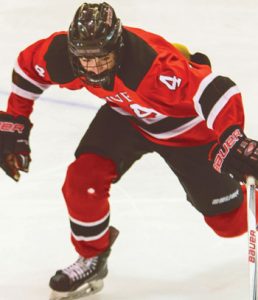 An overtime goal was all that separated Rivers (22-6-4) from a New England Small School title last winter. With a big group back, this should be another great year for the Red Wings. 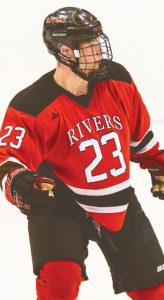 Senior defenseman Mike Young has committed to UConn and will be amongst the league’s top blueliners. Sophomore Tony Andreozzi has already committed to Brown.

And in goal, junior Aidan Porter is a returning starter for the Red Wings.

Roxbury Latin (15-9-0) is coming off a solid campaign, coach David Cataruzolo’s first behind the bench. This year, defense will be a strength.

Offensively, junior Jimmy Duffy (29 pts) and sophomore Jack Luca (23 pts) will be the go-to players. More production will need to come from other sources as well.

And in goal, veteran senior Bryan McGrath returns, giving RL a solid presence in the nets.

There is more depth this season at St. George’s (16-11-0), but the Dragons do have to replace 10 players from last season’s club, and a bunch of scoring, which could be tough. 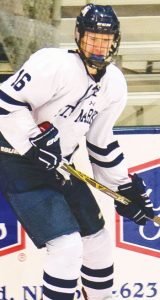 Junior holdover Jaren Debolt will be a presence on the blue line. Look for newcomers Max Thomson (junior) and John Jammers (sophomore) to have impacts.

In goal, senior Shane Conlon is ready to take over the top job full time for the Dragons. 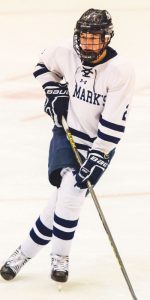 Can St Mark’s (23-6-1) continue the amazing success (two straight New England titles) it has had the past few years? Coach Carl Corazzini feels his club will have good depth on defense and in goal, but will have to replace five of last year’s top six scorers up front.

The only top-six scorer back is senior Ethan Kimball (38 pts) and he will be the Lions go-to guy. Newcomers ready to jump right in are sophomore Connor Berry and freshmen Sean Farrell (Harvard commit), Tucker Hartman and Tyler Young.

New junior C.J. Mckennitt and freshman Cam Rubin are a pair of goaltenders new to the St. Mark’s program.