Prep Elite Tournament runner-up Rivers cruised to the Eberhart Division crown last winter, running the table. The Red Wings will be considered the favorite again this winter as well.

A consistent offensive attack will be the key if Brooks (7-15-4) is to get back on the north side of .500. Coach David Ries feels his club is solid on the blue line and in the nets.

Up front, senior Gavin Cann and junior Mitch Nenninger will be asked to provide some solid scoring. Headlining a host of newcomers in the forward ranks are junior Colin Voloshin and sophomores Steve Higgins, Parker Sondag and Charlie Alcorn.

Senior Paddy Mangan and juniors Owen Borek and Michael Hughes are a solid veteran trio on defense for the Bishops. New junior Noah Camin should see some quality minutes.

BB&N (9-16-1) took some big steps last year under first-year coach Peter Russo and with a big senior class, Russo is hoping to continue on that trend again this year.

Senior tri-captains Corey Herron and Ryan Donnelly (also a returning ISL All Star), and junior Max McKay (13 pts) will handle things on defense for the Knights. Eighth-grader C.J. Beals is a potential youngster to watch.

New junior John Day is ready to show his talents between the pipes for BB&N.

The nucleus up front for coach Bill Riley will be seniors Kai Duenez and Tyler Forbes, and juniors Jonah Gold and Drew Burke, a group tasked with offsetting the loss of some key contributors from last season. New junior William Torriani from Canada will fit right in.

On the blue line, senior Cam Schmitt will be a cornerstone for the Zebras.

The goaltending position will be deep with senior Thomas Steere, who will be a key factor for Groton. He will be pushed by sophomore Kevin Clark and freshman Tristan Mecenas.

Middlesex (5-17-2) lost just five seniors so the returning experience alone will be a positive for the Zebras. Junior Joe Stanizzi will be a backbone in goal for coach Joe Mallen. 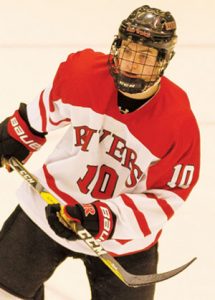 An Elite Tournament finalist the past two seasons, Rivers (24-5-2) enters the 18-18 season minus their top eight scorers from last year. Still, there is plenty of talent for coach Shawn McEachern to work with.

In the forward ranks, senior Teddy Wooding, senior Tyler Capello and senior Billy Shea will be pressed upon for leadership and production. 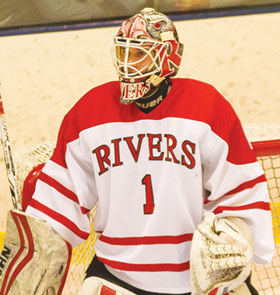 After a solid campaign last winter, Roxbury Latin (16-9-1) will go at it with a young club this winter with only two seniors on the roster.

The Foxes do return their top two scorers though, so expect senior Jimmy Duffy (34 pts) and junior Jack Luca (37 pts) to be the go-to guys up front for coach David Cataruzolo.

Senior Zach Milton will be a key blueliner, while RL must develop a replacement for the graduated Bryan McGrath between the pipes.

St. George’s (8-15-2) head coach Jeff Dwyer feels he will have a more complete team this winter with some added firepower power up front to go along with what should be an experienced blue line corps.

Senior book-ends Max Thomson and Jared Debolt will handle things for the Dragons on the defensive side. New sophomore Dima Piskun should see some time.

For St. Mark’s (11-16-1) to have a successful season, new players to the program will have to play to their potential. The Lions will be a bit young on the back end. They did lost two players (Sean Farrell, Henry Thrun) to the National Development Program.

Sophomore Tucker Hartmann will be a defensive mainstay for coach Carl Corazzini. New junior Ben Smith should provide some immediate help, while freshmen Jake Oblak and Ian Moore look to crack the lineup.

In goal, senior C.J. Mackenitt, who played the vast majority of minutes last winter, returns to give St. Mark’s some solid netminding play.