Day 2 is in the books in the Eastern Junior Hockey League’s Frozen Finals round-robin. The Boston Jr. Rangers got their first win with a 5-3 decision over the New Jersey 87s, while At-Large entry New Hampshire Avalanche improved to 2-0 with a 9-3 rout of the Lumberjacks Hockey Club. 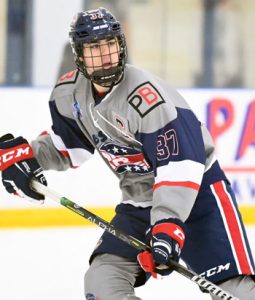 The Jr. Rangers, the Central Division champions, got started early, jumping to a 3-0 lead after the first period on goals from Nathan Young, Ryan Bailey and Johnny Malandruccolo.

The 87s climbed right back into it in the second stanza. Late in the frame, Matt Bielinski scored to get NJ on the board, and in the period’s final minute, Nick Swain fired one home from the high slot to make it a 3-2 game heading into the third period.

Early in the third period, though, the Rangers got a huge goal from Nate Matthews to take a two-goal advantage at 4-2. Bryan Van Ness made it a 4-3 game, scoring with 2:23 left and the 87s goalie pulled for a sixth attacker.

Connor Bizal sealed it for the Jr. Rangers with an emtpy net tally with just 3.5 seconds left in regulation. 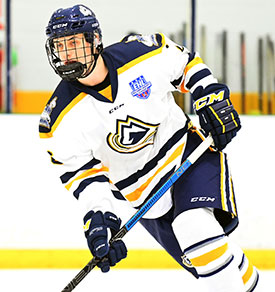 In the second game, the Avalanche had their offense in high gear, scoring three times in the second period and four more in the third to win this game convincingly in a battle of two teams that had won on the first day of action.

First period goals by Max Cocchi and Thomas Dempsey propelled the Avalanche to a 2-0 lead after the first period.

Matt Carlson finished with a hat trick for the Avalanche, while Cocchi and Sami Hakkarainen each contributed a pair of goals. Aden Hotchkiss also scored for the winners, who now at 2-0 have the upper-hand in advancing to the Saturday’s title game.

For the Lumberjacks, Dylan Infantino, Jeremy Swartz and Gabriel Trepanier each had a goal.

In today’s final round-robin action,  the Lumberjacks take on the NJ 87s at noon, while the Avalanche and Jr. Rangers have a 3pm faceoff.