The Eastern Hockey League (EHL) and Premier (EHLP) level both witnessed notable changes for the league’s power rankings, while a New England Conference (NEC) squad dropped one spot after suffering a tough loss.

HNIB News recaps Week #7 for another edition of Keeping Up with Kyle.

It was an interesting week for the New England Wolves, after head coach Tim Kunes and his squad split their two-game set for the week. While New England dropped its first contest, 5-1, to the Maine Eclipse, the Wolves rebounded with a commendable in-conference victory. 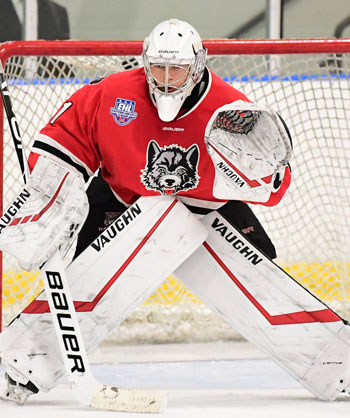 The Wolves and New Hampshire Avalanche faced-off on Sunday night and let’s just say that New England goaltender L.J. Newell stole the show. The Littleton, CO native recorded 46 saves on the day as New England defeated the Avs by a 3-1 final. Additionally, Newell turned away 21 New Hampshire shots during the contest’s final frame.

Keep in mind that the Avalanche are one team that’s usually ranked in the league’s power rankings. On the offensive side of the puck, the Wolves were two-for-four on the power play while Donnie Feldman, Ricards Jelenskis and Justin Pitari all found the back of the net.

Feldman enters Week #8 with seven goals and two helpers on the year and his nine points also lead the Wolves in scoring.

Kunes expressed how crucial the win was against the in-conference rivals.

“Really important to bounce back after the effort last game,” said Kunes. “I think we have a really good team and I’m looking forward to the next game.”

Speaking of the Wolves’ first contest from the frame, the Maine Eclipse ended their five-game losing streak after earning the third win on the season. The Eclipse witnessed two first-period goals from Mattingly Wierl and Conrad Szmyd, while Julian Etauri found the back in the second period.

Let’s not forget that Maine received insurance goals from Ryan Turse and Szmyd again during the final frame. As for Szmyd, the goals marked the New Jersey native’s first two goals this season. 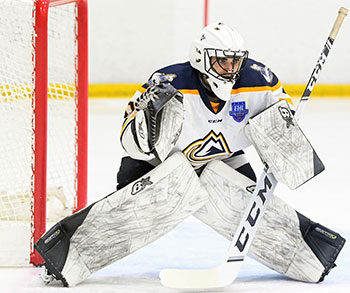 Moving over the power rankings, the Avs were the lone EHL team that dropped one position for the weekly spotlight. However, New Hampshire collected two wins for the week. The Avs kicked off the week with a 4-0 shutout over the Seacoast Spartans, which also witnessed New Hampshire goaltender George McMichael earn his second shutout on the season.

McMichael and company followed up the victory with a 6-4 win over the Connecticut Chiefs. While the Chiefs were two-for-two on the man advantage, the Avs also cashed in two power-play goals which was arguably the game’s difference maker.

It also didn’t hurt the Avs that they netted three goals during the third period thanks to Mitch McGinn, Chris Paige and Chris Aarons. The blueliner in Aarons earned the game-winning goal and enters Week #8 with nine points (3g-6a) for the 2020-21 campaign. Keep in mind that New Hampshire has six skaters with six or more points this season. 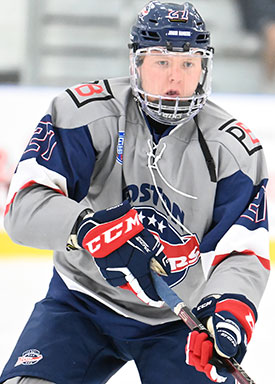 New Hampshire’s biggest rivals in the Boston Jr. Rangers were the NEC squad that jumped the Avs for the power rankings. Yes, Boston only skated in one contest, but it was a commendable 4-3 victory over a tough Seacoast squad. The win also marked Boston’s third “W” vs. the Spartans which were all earned since late October.

Keep in mind that Seacoast netted three goals during the first period and it appeared that the Spartans were ready to steal the week’s headlines. However, the Jr. Rangers responded with three goals of their own during the second frame and later saw Tommy Carr net the game-winner midway through the third period. It seemed that the blueliner couldn’t have picked a better time to record his first goal on the season, right?

The Walpole Express and East Coast Wizards were also busy on the ice and against each other. The two NEC rivals faced-off twice during the week, but it was Walpole that skated away with all four points that were available on the table.

Not only did the Express earn two victories over East Coast, but Walpole shutout the Wizards on both occasions. The Express kicked off the goaltending and defensively-minded frenzy with a 2-0 on Saturday night. Max Burum and Josh Grund inked their names on the score sheet, while Burum’s tally was the game-winner.

The contest was 1-0 until the games final seconds when Grund scored an empty net goal. The two teams combined for 84 shots, and it was Walpole’s Mason Palmer who earned his first shutout for 2020-21. However, East Coast’s Adam Yost was just as impressive between the pipes after he recorded 42 saves on the night.

Sunday played out different for another victorious Walpole squad. The Express defeated the Wizards 4-0 after Grund found the back of the net for consecutive days and three other Walpole skaters earned tallies. Romeo Torain kicked off the scoring when the forward recorded his first goal on the season during the game’s opening period. Jake Lincourt and Jack Rose were the other skaters that light the lamp for Walpole.

In the blue paint, it was Eric Buchholz this time around who earned the Express’ third shutout this season. Buchholz, 19, recorded 30 saves on the night and currently owns a 1.77 goals-against-average this season.

Heading south, the Mid-Atlantic Conference’s Connecticut Chiefs and New Jersey 87’s combined for five games. Both the Chiefs and 87’s collected a pair of wins, yet the Chiefs also suffered two losses.

Connecticut opened the week with a tough 3-2 loss to the likes of the Railers Jr. Hockey Club and New Hampshire handed the Chiefs a 6-4 loss on Friday. Still, Captain Max Phillips and company followed up the loss to the Avs with a sweep of their own against New York Apple Core. 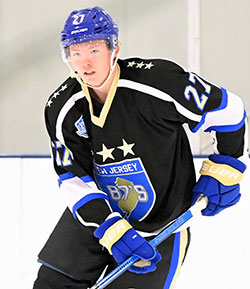 On Saturday, the Chiefs earned a nail-biting win over New York, 2-1. After allowing the first goal during the opening frame, Connecticut responded with one goal in the second and received the game-winner off the stick of Jason Gordon with less than six minutes remaining in the contest.

Chiefs’ goaltender Mike Eastman earned his first victory on the year with a solid performance and turned away 33 Apple Core shots.

Between the pipes, it was Chiefs’ goaltender Zach Richards who displayed a solid outing. The Hampstead, MD native recorded 44 saves and earned his second win for the 2020-21 campaign.

Fans likely realized that the 87’s continued to build on their lead for the MAC standings. New Jersey improved to 12-0-1 after earning “revenge” against the Connecticut RoughRiders and collecting a clutch road win over the Philadelphia Little Flyers.

Keep in mind that the RoughRiders are the only team to date that have defeated New Jersey, which was on Tuesday Oct. 21. So, it didn’t take long for Nick Swain and company to bounce back considering that they took down Connecticut by a score of 10-0 on Wednesday.

As for Swain, the forward recorded a hat trick and chipped in two helpers for a five-point outing. Additionally, Kei Yasuda and Donte Termani weren’t strangers to the game’s score sheet, either. Yasuda joined Swain for a five-point night with one goal and four assists, while Termani continued his hot streak with a two goal-night and one helper.

New Jersey goaltender Jeremy Connor wasn’t tested often but that can also be a challenging task. Connor earned the shutout after recording 23 saves on the afternoon and marked the team’s second shutout this season, overall.

The blue and gold headed west to face-off with another in-conference rival on Friday. The 87’s and Little Flyers matchup was one of the more intense and entertaining games on the week. After the two teams exchanged goals in the first period, both clubs were also productive in the second frame.

Philadelphia put the 87’s in an unusual spot to begin the second period when the Little Flyers took a 2-1 lead thanks to Connor MacDonell. However, the 87’s proved again just why they’re ranked No. 1 for the league’s weekly spotlight.

Everest Schneider and Ben Gibbons both found the back of the net later in the frame and the 87’s never looked back from that point on. Also note that Schneider’s tally marked the team’s second power-play goal on the day, but Termani later recorded a power play goal to kick off the third period scoring. After Swain chipped in a the empty net goal, the 87’s not only defeated Philadelphia 5-2 but extended their winning streak over the Little Flyers this season to five games.

While the RoughRiders suffered a tough loss to open week, Connecticut bounced back with a statement win when the squad defeated the Protec Jr. Ducks by a 7-3 final on Saturday night. The RoughRiders hosted the Jr. Ducks at SoNo Ice House and tallied three goals in the first period to welcome Protec back to Connecticut.

The second period’s outcome was borderline a carbon copy of the first frame, considering that again Connecticut scored on three occasions while holding the Jr. Ducks to just one goal. RoughRiders’ Dominic Civitano led the way with three points (2g-1a), while Colin Bella recorded his fourth multi-goal outing this season. Additionally, the RoughRiders moved back into second place for the MAC and are 7-6-2 (16 points) on the year.

Similar to the EHL level, New Jersey’s EHLP team also found success against the City of Brotherly Love. The 87’s swept the Philadelphia Little Flyers by scores of 5-4 and 5-1. While a number of 87’s recorded multi-point efforts over the weekend, goaltender Matt Corella displayed a strong outing in the 5-1 victory. The Middletown, NJ provided the 87’s with all the confidence they needed after recording 25 saves on 26 shots. 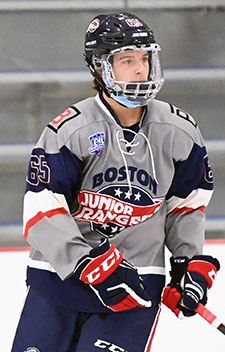 The New Hampshire Avalanche joined New Jersey as the only other team that collected multiple wins for the week. New Hampshire defeated the New England Wolves in convincing fashion by a score of 9-3, and later took down the Connecticut Chiefs 7-4. Forward Tucker Tassone and company are now 9-0-0 and have outscored opponents 51-22 in the process.

New Hampshire sits atop the North Division, but one another team that’s in first place for their respective division is the Boston Jr. Rangers. Not only did the Jr. Rangers defeat the Jr. Railers Hockey Club by a 4-2 final, but Boston also excelled on spot in the power rankings.

As of Tuesday, Nov. 10, there are over 15 contests scheduled for Week #8 in the EHL. The Seahawks Hockey Club have an opportunity to turn heads with in-conference matchups while Walpole also entails a busy schedule and hopes to prove that they’re not slowing down anytime soon.

The Protec Jr. Ducks and Philadelphia Little Flyers are set to face-off for the first time this season. The MAC squads are set for game-action on Friday and Sunday at IceWorks Skating Complex in Aston, PA. Both teams are fresh off a loss and hungry to climb their way back up in the standings.

In the EHLP, there’s a heavyweight battle between the Boston Jr. Rangers and Walpole Express which is set for a 2:00 p.m. puck drop today, which fans can expect will earn headlines.