There might be a snowstorm outside, but the Eastern Hockey League (EHL) still entailed plenty of action for Week #17.

Two teams broke headlines and for different reasons, while one underdog took down a first-place squad for the first time this season. Let’s recap another week around the EHL in Keeping UP With Kyle.

The Junior hockey community has heard it before on the EShow podcast, and they’ll hear it again…

The league’s North Division is interesting, to say the least. Since the calendar flipped to 2021, the north has been nothing shy of entertaining – just ask the Lumberjacks’ Hockey Club.

The Lumberjacks kicked off 2021 with four consecutive losses, after not skating in a contest since November. Well, head coach Jim Mosso and company enter Week #18 riding a three-game winning streak. Better yet, the Lumberjacks defeated all three divisional rivals in the New England Wolves (7-4), New Hampshire Avalanche (4-2), and Seacoast Spartans (2-1). 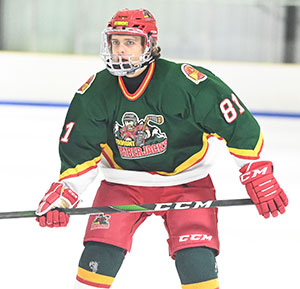 Taking down all three squads is no easy task, either. The Avs and Spartans were inked in the EHL’s power ranking for Week #17, while the Wolves are no stranger for making a case to slide into the No. 5 spot. Still, it’s the Lumberjacks who bumped Seacoast out of the top five and earned the No. 5 ranking for this week.

The ‘Jacks received plenty of depth scoring over the frame, which also included Aidan Lavalley who recorded a three-point night (1g-2a) against the Wolves on Thursday.

“It feels great to be able to turn things around,” said Lavalley. “We faced some adversity at the beginning of the season having to find a new home in Waterville Valley where we eventually found a way to develop as a team on and off the ice.”

Perhaps its fair to say that a little adversity benefitted the Lumberjacks – but only time will tell. 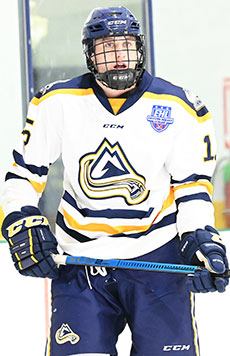 New Hampshire was the only other team from the North who earned a win for the frame. While the Avalanche have experienced some unusual struggles lately, the squad did collect a 5-1 victory against Seacoast on Thursday.

Similar to the Lumberjacks, the Avs witnessed a collective effort on the offensive side of the puck vs. the Spartans. Thomas Dempsey, Henry Carlson and Mark Blaney all posted two assists, while Aden Hotchkiss recorded one goal and chipped in one helper.

Avalanche goaltender George McMichael continued to shine this season, after the Goldens Bridge, NY native recorded 30 saves against a Spartans team that’s been hot since the new year started. The Avalanche enter February sitting atop of the division with 45 points (22-5-1).

The Central Division closed out January with a busy schedule in Week #17, and one team in particular broke headlines.

After the Valley Jr. Warriors lost three contests over the frame to the Walpole Express (4-2), Railers Jr. Hockey Club (3-2) and Boston Jr. Rangers (2-1), Valley bounced back with a 3-2 victory over Boston on Sunday. 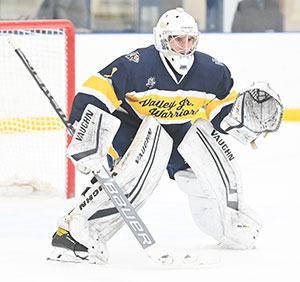 Keep in mind that Valley’s two losses prior to the big win were settled in overtime. Yet, the Jr. Warriors only needed 60:00 against the Jr. Rangers. The two squads traded goals in both the first and second periods, which led to the dramatic finish in the game’s final frame.

Nick Serafin scored with less than seven minutes remaining in the contest, while Valley goaltender Noah Dorsey-Sorofman took care of business and shut the door on Boston. Sorofman recorded 40 saves on the day and turned aside all nine shots he faced in the third period.

The win marked the first time Valley defeated the Jr. Rangers this season and snapped a four-game losing streak, overall.

Yet, the Jr. Rangers weren’t strangers to the win column for Week #17. Prior to Sunday’s loss, Boston collected a pair of victories. The most recent win, as noted above, was decided in overtime against Valley, which witnessed forward Conor Bizal net the game-winner with less than 2:00 remaining in the extra frame. 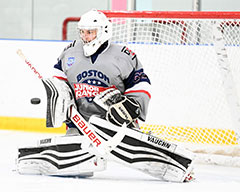 Additionally, Jr. Rangers goaltender Nathan Mueller collected back-to-back wins during the week one of which was a 4-2 victory against the Railers on Wednesday. Overall, Mueller extended his winning-streak to nine games, and carries a 1.64 goals-against-average (GAA) and .949 save% for 2020-21.

Speaking of Walpole, the squad extended their division-best winning streak to four games after the Express earned a 4-2 win against Valley on Wednesday. It seems that the team’s recent success on the ice and Boston’s loss also bumped the Express to No. 2 for this week’s power rankings.

Walpole’s Zack Simon led the way with three helpers in the contest, while newcomer Brayden Patricia tallied one goal and one assist. Lorenzo Marcolin earned the game-winning goal, which also marked his third game-winner on the year. 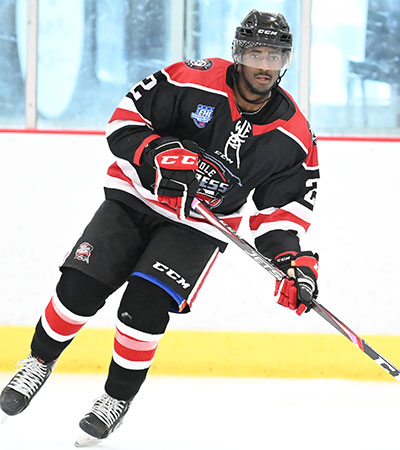 Express defenseman Romeo Torain has also been a constant this season for Walpole and shared his take on the team’s recent success.

“We’ve been able to achieve our recent success by sticking together from practice to games, and working hard day in and day out,” said Torain. “Every single (Express) player knows what it takes to win, especially against tough opponents.

The blueliner also expressed that while the squad has been hot of late – they “are taking things one game at a time.”

Let’s not forget that the EHL witnessed a pair of intriguing battles between two teams that sit side by side in the central with the East Coast Wizards and Western Mass Chiefs. However, the teams were riding two different paths entering the first contest on Wednesday.

The Wizards were riding a four-game winning streak overall, and extended it to five after taking down the Chiefs 5-3 at Olympia Center. While the Chiefs opened up the scoring, the Wizards answered back with two first-period goals. East Coast’s Will Jennings (2g) and Andrew Stefura (1g-1a) both tallied power-play goals and finished the contest with multi-point efforts.

Yet, the Chiefs rebounded on Thursday and snapped their four-game losing streak with a 5-3 win of their own. Western Mass’ Dominic Chirico (0g-2a) and Mitch Rickert (1g-1a) led the way with their multi-point outings, in addition to goaltender J.P. Mella earning his third win on they year.

As noted, the Chiefs and Wizards are neck-and-neck with one another in the standings, which entails the Chiefs one point ahead (12-11-4—28PTS) of East Coast for third place entering Week #18.

Well, the EHL witnessed its first division champions for 2020-21.

Prior to clinching the South Division, the 87’s also took down the Philadelphia Little Flyers on Wednesday by a score of 7-3. The teams combined for five goals in the first period (3-2), but it was the blue and gold who skated away with the contest.

New Jersey’s Nick Swain finished the day with two goals, while Yasuda recorded four assists. Additionally, blueliner Dylan Gutierrez posted a season-high three assists in the win. It seems that the 87’s have the right mix and recipe to further succeed on the ice.

“Timely goal-scoring and timely saves have been a huge factor in recent weeks,” said New Jersey head coach Adam Houli. Our ‘next man up’ mentality has started to spread and it’s a good time of the year for that.”

While Apple Core suffered a loss to the 87’s, New York also earned one win for Week #17. Apple Core defeated Team Maryland 6-3 to kick off the frame, and New York’s John Myers netted his first hat trick of the season. Mike Leva and Sam Mitchell also both recorded two assists on the day.

The Protec Jr. Ducks were back in action during the frame and collected a 4-3 victory over the Connecticut RoughRiders. Protec received clutch goal-scoring from Spencer Quinn and Brody Selman during the third period.

Quinn’s netted Protec’s third goal with less than 5:00 remaining in the contest, but a Connecticut goal just moments after then set up all the dramatics for Selman. The New Jersey native in Selman found the back of the net with nine seconds left in regulation.

Between the pipes at the Pond, it was goaltender Dylan Knighton who earned the victory. Knighton was busy all afternoon in the blue paint and was tested on 36 occasions.

Yet, the Jr. Ducks traveled to Maryland on Thursday and suffered a 5-2 loss to Team Maryland. The Jr. Ducks’ rivals in Team Maryland recorded goals in all three periods and witnessed Halen Cookston record his second multi-goal game for the season.

Overall, Maryland has won three of its last four contests and sits in the second place for the division – five points (32) ahead of the Little Flyers.

The EHLP level was locked and loaded for Week #17.

The EHLP witnessed 15 contests over the frame and most notably the Avalanche collected three wins. New Hampshire defeated the Lumberjacks (3-2) and New England Wolves twice by scores of 8-3 on both occasions.

The Avs enter Week #18 ranked at No. 1 while the Boston Jr. Rangers leaped over the Railers Jr. Hockey Club.

Boston shutout the Jr. Warriors 3-0, and it was masked man Theo Bjork who earned a shutout in the goaltender’s first game on the year with the Jr. Rangers. The Jr. Rangers’ Central Division rivals in the Railers fell to Walpole, 3-1, but also collected an 8-2 win over a hot Chiefs team. The Railers sit in second place behind Boston and trail the Jr. Rangers by 14 points.

Aside from the loss, the Chiefs were another successful squad over the week. The Chiefs collected two victories after taking down the Walpole by a score of 5-3 and then defeated Valley, 6-2.

Heading down south, the New Jersey Renegades earned a key victory over the 87’s on Sunday. The Renegades posted a 4-2 win over their in-state rivals and the win marked the first time this season that the squad defeated the 87’s.

Believe it or not but the EHL’s North Division should only get more interesting as February progresses.

This hockey enthusiast suggests that fans tune in or try to follow along the Avalanche-Lumberjacks game on Wednesday (3:00 p.m). The Avs have been the hunted lately, and due to how competitive and exciting the division has been. The Lumberjacks are back in the mix after joining the power rankings, but can they stay consistent in that fold?

While the 87’s earned a divisional title and checked one more box off their list for 2020-21, it will be interesting to see how New Jersey responds moving forward on the ice – the 87’s are likely eager for the postseason to begin and get a crack at teams outside their division.

Walpole has been hot – a four-game winning streak is the longest active streak for either the Central or North Division. The Express are likely too far behind the Jr. Rangers to win the division…but there’s a bigger picture there and Walpole seems equipped for the long haul. The Express face-off with the Seahawks on Thursday, and it seems that the Seahawks always wake up for the big games.