The Eastern Hockey League (EHL) resumed action on Tuesday, Jan. 5, but with one notable change. Instead of the league’s 17 teams split into two conferences, the EHL entered the second half of the 2020-21 season with a modified three-division format.

Here is the EHL’s layout for the remainder of the season:

The Seacoast Spartans turned heads and wasted no time making themselves comfortable in the North. Head coach Brett Tryder and company swept the Lumberjacks in a three-game set and broke an eight-game losing streak.

The Spartans defeated the Lumberjacks 7-2 on Tuesday, while Cooper Board (1g-1a) and Sean O’Gorman (1g-2a) recorded multi-point efforts in the contest. Keep in mind that Board finished the three-game set with five tallies and three assists for a total of eight points, which also earned him Top Performers honors. 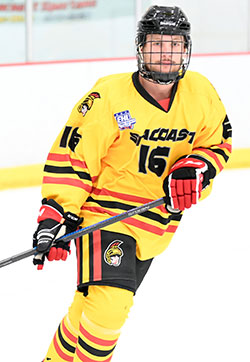 There’s no doubt that the Glen Ellen, IL native was a key reason why Seacoast also followed up the first victory against the Lumberjacks with 9-5 and 4-3 victories. Yet, Spartans defenseman Zach Henkin earned Top Performers honors on the blue line. The 20-year-old and second-year EHL skater not only recorded his first career EHL goal, but posted one point in all three contests (1g-2a).

The Spartans’ 9-5 and 7-2 victories also marked season highs (goals scored) for the squad and was the second occasion this season Seacoast posted a three-game winning streak.

“It was huge for us,” said Spartans forward Bjorn Schuepbach. “I feel like we’re a new team in 2021. We’ve found a new chemistry between us and we’re more dedicated and more committed to our team.”

Schuepbach and Seacoast enter Week #15 with a 10-13-3 record and own the same amount of points (23) in the standings as the second place Wolves for the North Division.

While 2021 and the Spartans welcomed the Lumberjacks with a trio of losses, the ‘Jacks bounced back with a pair of statement victories over New England. Leading scorer Paul Fine-Lease (9g-10a—19PTS) and company defeated the Wolves 6-2 and then 5-4 in overtime over the weekend. 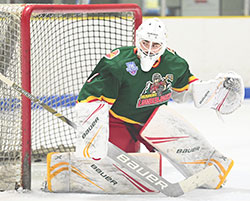 Corey Popowcer led the way in the first victory for the Lumberjacks with three helpers in addition to Davis Bones who netted two goals on the day. Additionally, Fine-Lease recorded two points (1-g-a) in the outing, which also marked his seventh multi-point effort on the year.

Lumberjacks netminder David Reduzzi started in both victories, and turned a way a combined total of 79 shots. No. 1 between the pipes improved to 6-3-0 on the year and enters Week #15 with a .920 save%.

As for the Wolves, the losses marked the first time since Nov. 28-29 that New England dropped consecutive contests.

The Central was the busiest division around the EHL in Week #14. The first-place Boston Jr. Rangers, Valley Jr. Warriors, Western Mass Chiefs, Seahawks Hockey Club, East Coast Wizards and Railers. Jr. Hockey Club were all in action over the frame.

Valley skated in two contests while collecting two points in the standings. The Jr. Warriors kicked off the new calendar year with a 6-3 victory over the Wizards on Thursday and in large thanks to depth scoring. Six different Valley skaters found the back of the net in the team’s sixth win of the 2020-21 campaign – Urie Lurie, Ryan Nolte, Maxwell Tucker, Joe Biddle, Daniel Demchuk  and Matthew Horan. 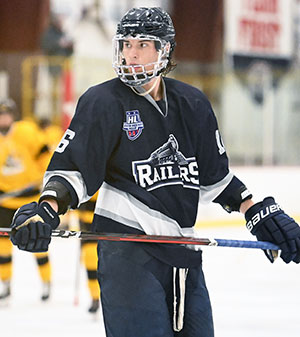 Jr. Warriors masked man Noah Dorsey-Sorofman recorded 32 saves between the pipes and earned his second win for the season.

The Railers Jr. Hockey Club  hit the ice for a pair of contests and like Valley collected two points. The blue train earned a 5-4 shootout victory over the Seahawks after erasing a 2-0 deficit. Railers skaters Teagan McAvoy, Brendan DeMarco and Mike DiMascolo all netted second-period goals which help swing the team’s momentum for the better.

While the Seahawks outscored the Railers 2-1 in the third period, it was Dimascolo who earned the shootout winner and helped the blue train earn their ninth win on the year. The Railers are 5-5-0 in their last ten games and sit in fifth for the Central (9-14-0—18PTS) behind the Chiefs (9-6-3—21PTS).

Speaking of the Western Mass. Chiefs…

The squad took down Valley by a score of 3-1 on Friday which was also witnessed newcomer Toivo Kramer earn a three-point night (1g-2a) in his first game with the Chiefs – talk about a grand entrance, right? Jason Gordon and Mitch Rickert also found the back of the net while Marshall McKallip posted 32 saves on 33 shots. 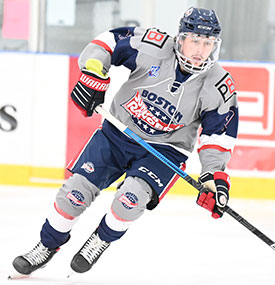 McKallip’s impressive performance earned top performing honors in net for the EHL and the victory marked his fourth win this season.

Let’s not forget about the top-ranked Jr. Rangers, who capped off the frame with a 9-2 victory over the Railers on Tuesday. Forward Johnny Malandruccolo not only returned to the lineup after a two-month hiatus but netted a hat trick and chipped in one assist – welcome back, Johnny.

Joey Schaefer (2g-0a) and Ryan Bailey (2g-1a) weren’t strangers to the scoresheet considering the two skaters combined for five points in the outing. Keep in mind that Bailey (14g-18a—32PTS) and Schaefer (13g-15a—28PTS) both rank in the top five for scoring on Boston.

The win not only earned the Jr. Rangers their 20th victory on the year, but extended Boston’s winning streak to nine games. During that span, the red, white and blue have also earned two shutouts and posted five-or-more goals on five occasions. 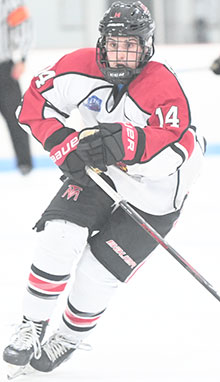 Migrating south, the Protec Jr. Ducks and Team Maryland were the lone South Division squads that faced-off. The two foes met twice at Ice World in Maryland and both contests required more than 60:00.

Team Maryland struck first and defeated Protec in the first meeting by a 6-5 final, after Halen Cooksten netted the overtime winner. Maryland’s Denys Arkhypenko (2g-2a) and Bobby Geier (2g-1a) were also clutch during the outing with their production on the score sheet. Overall, Arkhypenko finished the two-game set with four goals.

While Maryland enters Week #15 in second place for the division (11-9-3—25PTS), the Jr. Ducks are catching up. Protec bounced back after the overtime loss and defeated Team Maryland on Thursday, and in dramatic fashion. 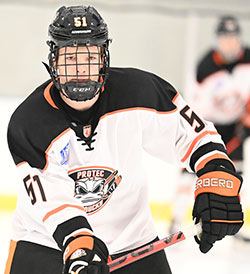 The Jr. Ducks erased a two-goal deficit en-route to their eighth win this season, and it was Protec’s Conor Tartaglione who led the way with two goals in the contest. Keep an eye on the 6-foot-1 forward, who’s netted five goals in eight games played for the flock. Blueliner Will White also chimed in on the Ducks return and month-long break.

“It felt great to get back with the boys and grabbing a win on the road,” said White. “It was a big win for the start of the second half of the season.”

What is interesting is that the two divisional foes have gone into overtime in five out of the six matchups, thus far. Aside from the first-place New Jersey 87’s the standings are tight in the South – expect more overtime contests and changes in standings for that division.

The Eastern Hockey League Premier (EHLP) level was also busy over the weekend. It seems that the Railers’ EHLP squad is on a mission this season, especially after the squad collected wins over the Jr. Rangers and Chiefs.

The Railers kicked-off 2021 with a 5-2 over the Boston Jr. Rangers on Friday and later took down the Chiefs by a score of 4-3 on Saturday. To no surprise, the Railers’ Jayden Blackburn earned top performers honors at the forward position for the EHLP. The youngster netted five total goals during the frame, but also recorded a first-period hat-trick vs. the Chiefs – impressive, no?

Similar to the EHL level, the Lumberjacks’ EHLP squad swept the Wolves and by scores of 5-1 and 6-0. Lumberjack’s forward Sawyer Wirsing led the way on the offensive side of the puck in the first contest after he posted a hat trick in addition to two helpers on the day. Yet, goaltender Sam Fath earned both victories for the Lumberjacks between the pipes and also earned his first shutout for the 2020-21 campaign. Rightfully so, Fath earned honors as the league’s top performing goaltender for Week #14.

The Garden State’s 87’s continued to roll after the squad extended their winning streak to nine by defeating the New Jersey Renegades twice over the weekend. The 87’s took down the Renegades by scores of 9-0 and 7-2, and improved to 15-3-1 on the year. Their 31 points in the standings aren’t only good for first place in the South Division, but are ranked second for the EHLP behind the Jr. Rangers (15-2-4—34PTS).

The new divisional alignment impacts the EHL and spices things up, and quite frankly, it’s not a bad thing for the league. Due to the changes, new rivalries are on the horizon while others will heat up more than ever – just keep your eyes on the Jr. Rangers and Walpole in the EHL.

Walpole was aggressive over the Holiday break and added a few new skaters – one of which was forward Brayden Patricia. The New Jersey native has been a top-point getter in the EHL since joining the league last year – yet, the Rangers are 20-1-1 and are arguably the deepest team in the league in all areas on the ice…both teams have one goal in mind which is a hoisting a trophy, but remember that Walpole and Boston are both in the Central Division…will the two teams beat each other up by the time the postseason arrives? Only time will tell…

Seacoast is another interesting subject.

The team has been streaky all season but like Walpole – the Spartans added talent and up front on offense. The Spartan’s three consecutive wins over the Lumberjacks were statement wins – make no doubt about that. While Seacoast takes on the Lumberjacks again on Wednesday, the Spartans face-off with the Wolves and Avs – if the Spartans take at least four out of six points from those contests then they should have the league’s full attention for the long haul.

Keep in mind that Sunday and Monday play the role of host for the first-ever Granite Cup, which showcases the North Division, a la Seacoast vs. the Avs and the Wolves.

At the EHLP level, it’s another packed weekend full of games. This hockey enthusiast is curious to see how the Avalanche and Little Flyers perform – both are scheduled for multiple games and are likely eager to get back on the ice and collect points in the standings. 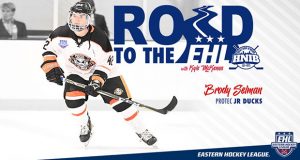 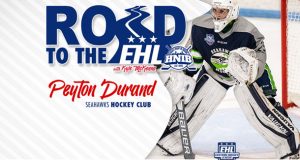 Road to the EHL Series: Seahawks Goalie Durand Has ‘A Mindset Of A Pro’