In the blink of an eye, the Eastern Hockey League’s (EHL) first-round of the 2020-21 playoffs were completed and in dramatic fashion.

The second round of the postseason begins on Monday, March 8th, which means it’s time for another playoff preview.

Similar to Round 1, the EHL’s second round of the 2020-21 postseason is based off a best-of-three series “with home-ice advantage being determined by the EHL Operating Rules.”

The North Division opens its playoff hockey during Round 2…

Game 1 between the Avalanche and Spartans is set for Wednesday at 1:40 p.m. puck drop at Ice Den Arena. After posting 26 wins on the year, the Avs enter the postseason on a three-game losing streak and have won just one contest in their last five games. 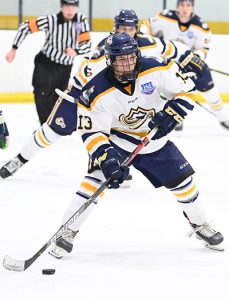 Yet, don’t let that fool you. New Hampshire recorded a 6-1-0 record against the Spartans this season, while collecting three shutouts. On the offensive side of the puck, the Avs were led by Artem Mateichenko, who netted 10 goals and earned 31 assists for 41 points for the 2020-21 campaign. Let’s not forget that New Hampshire’s masked man in George McMichael posted 16 wins and recorded three shutouts this season – one of which was against Seacoast. 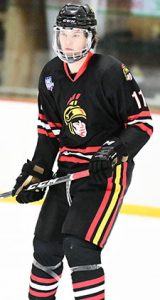 Seacoast Country hopes to interrupt the Avalanche’s plans to earn a third consecutive league title. The Spartans were one of the EHL’s tops stories once the calendar struck 2021, after Azam Jiwa (15g-22a-37PTS) and company kicked off the second half of the season with a six-game winning streak. The Junior hockey community should also keep an eye on forward Clendenin Stewart. The 6-foot-7 skater inked seven points (4g-3a) in the Spartan’s last four regular-season contests, and perhaps he’ll act as an x-factor for Seacoast in this series.

Don’t be surprised if this matchup entails three games.

Both teams enter the postseason after strong play over the past two months and counting. New England finished the regular season with a three-game winning streak, which included wins against all three divisional opponents. The Wolves are led by leading-scorer Ricards Jelenskis (22g-28a—50PTS), yet forward Patriks Marcinkevics might steal the spotlight. The Latvian native earned Stars of the Month honors for February after tallying 11 goals and chipping in five assists in just six games played – impressive, no?

Across the ice, the Lumberjacks aim to turn heads around the league. Forward Egan Schmitt led the ‘Jacks with 20 goals and 29 helpers, but also recorded 21 points on the power play (8g-13a) and three shorthanded tallies – yikes. Oh, and Schmitt earned six game-winning goals on the year. In the blue paint, expect Lumberjacks goaltender David Reduzzi to shine. The St. Louis, MO native posted 14 wins in addition to a .921 save% for the 2020-21 campaign. 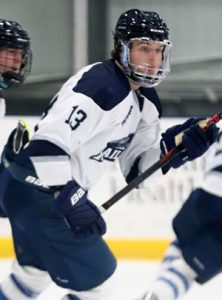 The moment the Jr. Rangers have been waiting for since last March, well, has arrived. Youngster Andy Moore (19g-28a—47PTS) and company aim for the organization’s first-ever EHL championship after a string of successful campaigns. Don’t forget about Ryan Bailey (17g-29—46PTS) and captain Nathan Young (11g-32a—43PTS), who weren’t strangers to the scoresheet, either. Goaltender Nathan Mueller looks to shutdown the (insert team), after posting 21 wins this season and recording a .948 save % – yes, you read that correctly.

After climbing their way out of the basement this season, the Jr. Railers advanced to the second round of the playoffs when the train defeated the East Coast Wizards in three games. Colin Oppelt was clutch in the first round with three assists, and netted the series clinching-goal in overtime in Game 3 against East Coast.  The Jr. Railers will be looking for their first wins of the season over the top-seeded Jr. Rangers. 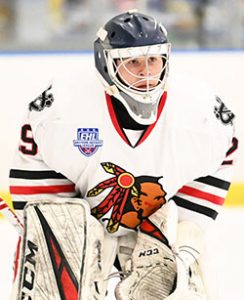 After sweeping the Valley Jr. Warriors in Round 1, the Jr. Express reminded the EHL how strong their depth is in all areas on the ice. On offense, Walpole is led by Zack Simon who netted 20 goals and recorded 33 assists for 53 points this regular season, while Brayden Patricia leads the Jr. Express with four points this postseason (2g-2a). Don’t sleep on blueliner Tod Philibert, either. The Quebec native is not only a game-changer, but potentially series-changer.

Well, the Chiefs proved they might be a  Cinderella story for this year’s playoff-action. After every ECrew member, including this hockey enthusiast, picked the Seahawks to defeat Western Mass in Round 1, the Chiefs swept the Seahawks in convincing fashion. Defenseman Dominic Chirico led the Chiefs with four assists, while the squad also outscored the Seahawks 5-1 in the two games played. Keep an eye on goaltender Marshall McKallip – who could cause headaches for the Jr. Express.

After a first-round bye and earning the EHL’s regular-season title, the 87’s resume action and take their first stride towards finishing the job. 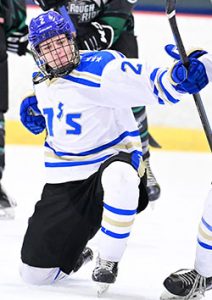 The 87’s leading scorer Kei Yasuda not only led the team in points (20g-39a—59PTS), but finished first in the EHL. The Japan native also received complementary scoring help from Dante Terramani. No. 12 for the blue and gold finished the year with 25 tallies and 27 assists for 52 points and proved that he’s a potential EHL Most Valuable Player (MVP) candidate. Let’s not forget that the 87’s are deep on defense with captain George Weiner and Cal Couell – who have the ability to eat up a lot of ice time and produce on the score sheet.

If there’s one team that could cause New Jersey trouble in Round 1 – it’s arguably Team Maryland.

For starters, Maryland was the lone team that defeated the 87’s twice this season. Head coach Josh Fusco’s squad boasts a physical presence that bodes well for playoff hockey, and there’s no doubt that team captain and EHL veteran Denys Arkhypenko is on a mission to lead his squad to a Cup final. The Ukraine native terrorized the Connecticut RoughRiders in Round 1, after posting four points (2g-2a) and earning one game-winning goal.

The Little Flyers were the other Southern division squad who earned a first-round bye. The City of Brotherly Love hosts Protec for Game 1 on Tuesday and finished the 2020-21 campaign with a 3-4-1 record vs. the Jr. Ducks. Philadelphia was led by forward Scott MeGraw who not only recorded 46 points (10g-36a) this season, but totaled two goals and 19 assists on the power play – talk about playmaker, right? Connor MacDonell was also no stranger to the score sheet. The Milford, MI native earned 16 goals in addition to 18 assists for 34 points on the year. It should also should be interesting to see which goaltender starts Game 1 between the pipes for Philadelphia – hello, Jakub Kubik?

The Jr. Ducks were one of the league’s top stories down the stretch after posting a six-game winning streak to close out their inaugural season and swept New York Apple Core in Round 1. While the Ducks only netted three goals in two contests, the flock received timely goals and from the likes of Christos Caminis and Connor Tartaglione, who netted the overtime-clincher in Game 2 on Friday at Brewster. Yet, Matt Sayles steals the spotlight for Protec. Since joining Protec in mid-November, the 6-foot-2 netminder is 6-0-1 and won both contests for the Jr. Ducks in Round 1.

The EHLP’s second round features eight teams. For the North Division, the No. 2 Lumberjacks face-off with the No. 3 Wolves – talk about a rivalry heating up between two organizations, no?

Migrating to the South Division, the No. 2 Philadelphia Little Flyers are set to hit the ice against the No. 3 New Jersey Renegades. The Little Flyers were 11-4-0 against the Renegades this season, but did drop their last two contests against New Jersey – this matchup could get interesting.