On Day 3 of the Eastern Hockey League’s Frozen Finals, the New Jersey 87s notched their first win in an exciting, up-and-down contest, edging the Lumberjacks Hockey Club, 6-5.  Even with the win, though, the 87s were eliminated from advancing to Saturday’s championship game.

The two teams combined for seven third period goals after the score was tied 2-2 after two periods.

New Jersey’s Jason Santoriello scored the game-winner on a one-timer with just 1:05 left in regulation. The 87s did hold a 5-3 lead before the Lumberjacks roared back to tie it with goals from Jackson Collins at 15:35 and Paul Fine-Lease at 16:18. It was Fine-Lease’s third goal of the day.

Fine-Lease’s second goal of the game gave the Lumberjacks a 3-2 lead early in the third period, before the 87s scored three straight goals, coming from Spencer White, Kei Yasuda and Jacob Crespo.

Everest Schneider and Bryan Van Ness also had goals for the 87s.  Louis-Joseph Guernon had an early goal for the Lumberjacks. 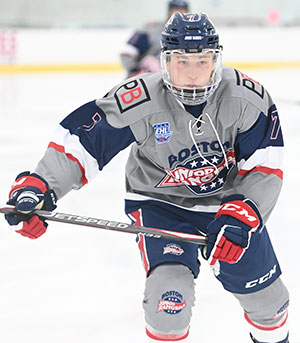 In the second game, the Boston Jr. Rangers earned their berth in the championship game with a 2-1 win over the New Hampshire Avalanche. The two teams will meet again in Sunday’s title game at 2 pm at Iee Line Quad Rinks in West Chester, PA.

A first period goal by Andy Moore put the Jr. Rangers ahead 1-0 late in the first period.

That goal stood until 6:06 remained in regulation play, when Moore’s second goal of the day pushed the Jr. Rangers lead to 2-0.

Carson Fotheringham finally got the Avalanche on the board with 3:26 remaining, but New Hampshire could not get the equalizer, setting up Sunday’s rematch for all the marbles.