The first Eastern Hockey League showcase of the 2021-2022 season did not disappoint, as the four-day event in Worcester, Mass., hosted by the Worcester Railers JHC, featured countless terrific matchups and an opportunity for players to perform in front of numerous collegiate coaches for the first time since January of 2020.

A total of 44 games were played at the Worcester Ice Center between the EHL and EHLP, and the interdivisional matchups saw many close contests including a few going into overtime. Let’s take a look at each division to see which teams came out on top in the first league-wide event of the season.

The Vermont Lumberjacks  were not far behind ,as they went 2-0-1 by defeating the Philadelphia Little Flyers 2-0 and the RoughRiders 8-1, but fell in overtime against the East Coast Wizards by a score of 3-2. Egan Schmitt stood out with eight points (3g, 5a) over the three games.

Rounding off the division were the Seacoast Spartans and New England Wolves. The Spartans were unable to muster a win in three contests, and while the Wolves lost two of three, they were able to earn their first win of the season with a 2-1 overtime thriller against the New Jersey 87’s, as Kristian Malec scored the game-winning goal. 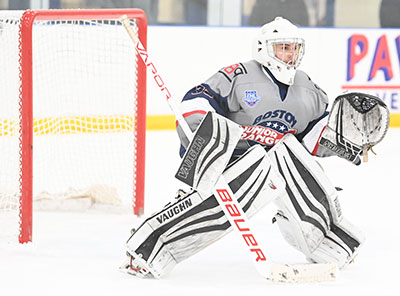 If you want an idea of just how stacked the East Division is, look no further than the Walpole Express. They won all three of their games–a 3-2 win over the Railers, a 5-2 victory over the Protec Jr. Ducks and 1-0 win over the Spartans–but still sit fourth in the standings.

Two of the three teams above them went 2-1 in the showcase. The East Coast Wizards beat the 87’s in a fast-paced, tight-checking 2-1 game, then beat the Lumberjacks 3-2 with an overtime goal from Jack Straub. The Boston Jr. Rangers also had a good showing in Worcester, beating the Valley Jr. Warriors 5-1 and Apple Core 5-3. Reigning EHL Goalie of the Year Nathan Mueller marked his return to the Rangers with a 2-0 record and .923 save percentage.

The Valley Jr. Warriors went 1-1-1 in the showcase, and their win came against Apple Core by a score of 7-5. Down 4-2 in the second half, the Warriors put up five unanswered goals to secure the come-from-behind victory. The Seahawks Hockey Club also overcame a second-half 4-2 deficit by defeating Team Maryland 5-4 for their lone victory in the showcase.

In the Central, the host team had the best showing by going 2-1-0. After their loss to the Express, the Railers Jr. Hockey Club blew out the New England Wolves 7-1, then handed the East Coast Wizards their first loss of the season with a 2-1 win.

New York Apple Core and the Connecticut Chiefs earned one win each, as New York beat the Seahawks Hockey Club 6-2 on a hat trick by Colby Walters, while the Chiefs picked up a 5-4 shootout win against the Jr. Warriors. Jack Devine had a goal in regulation, then ended the shootout with Pavel Datsyuk-eque deke to give the Chiefs its first win of the year.

Coming out of the showcase, it appears that the East and South Divisions have the most parity between the teams, as all four teams earned at least three points in the standings. 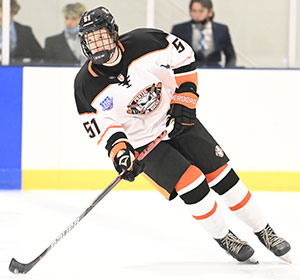 Team Maryland and the Little Flyers both went 2-1-0 at Worcester, as Maryland earned a 3-0 win over the Chiefs and 6-2 win against the Seacoast Spartans. A newcomer for Maryland raised some eyebrows, as Maryland native Farrell Dinn racked up four goals and three assists in the showcase. Philadelphia, meanwhile, defeated the defending champion Jr. Rangers 3-1 and followed that up with a 5-3 win over the Spartans.

The Protec Jr. Ducks and NJ 87’s picked up one win each, as the Ducks beat the Wolves 8-3 with a four-point performance by Spencer Quinn (3g, 1a) and five-point game by Will White (1g, 4a). On the final day of the showcase, the 87’s earned their win with a 3-2 overtime contest against the Seahawks Hockey Club. Matt Herrick slammed home a rebound for the overtime winner.

Similar to the EHL, the Premier Division had plenty of games going down to the wire. Over the first two days, six of the 10 matchups went beyond regulation.

The Railers had the best showing by going 3-0-0, as the host team defeated the New Hampshire Avalanche, Seahawks Hockey Club and Vermont Lumberjacks, with the final two games being 2-0 shutouts.

Philadelphia was not far behind, going 3-1-0 in their four games, including wins over the Boston Jr. Rangers, Vermont Lumberjacks and New England Wolves. Their only loss came against the Seahawks Hockey Club, who defeated the Little Flyers 3-2 and the 87’s by a score of 5-1.

While the Valley Jr. Warriors had a 4-3 setback against the defending champion 87’s, they put up wins against the Connecticut Chiefs and New Jersey Renegades. MacAllister Ward scored the goal of the showcase against the Renegades, cutting through multiple defenders before roofing a backhander for a shorthanded marker en route to a 5-2 win.

Despite the Renegades‘ loss on the final day, they made some noise of their own with a 3-2 win over the New Hampshire Avalanche. Joey Jamison was brilliant in goal by stopping 50 of the 52 shots he faced.

With the first showcase in the books, it’s safe to say the league will not have to wait another 620 days for the next one. Up next for the EHL Showcase Series is Walpole, Mass., and that event will take place from Oct 16-18.