The EAC will be just a three-team league this winter, with Bishop Feehan, Coyle & Cassidy and Bishop Stang competing in league play.

Scoring was at a premium last season for the Shamrocks, who need to develop a sustained offensive attack while still maintaining solid defensive zone coverage.

Feehan does have the luxury of five returning defensemen, led by seniors Cam Smith and Jack Murphy. Also ready to contribute are juniors Seth Dunphy, Tom Potenza and Tom Reilly. 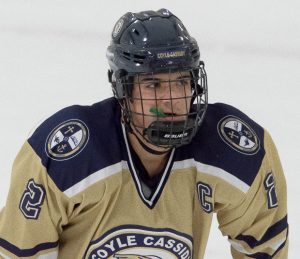 Darrell Borges’ team will lean on his experienced and returning players to play the right way and play strong team defense. “Their mental toughness and discipline will be keys to our team’s overall success,” Borges said. “Our number one goal this season is to play a 200-foot game, give a full 45-minute effort and get better every game. We look to retain our 2018 EAC league title and qualify for the MIAA tourney. And with one of the toughest schedules in D3 we should be prepared and ready to make a long run with hopes of playing at the TD Garden in March.” 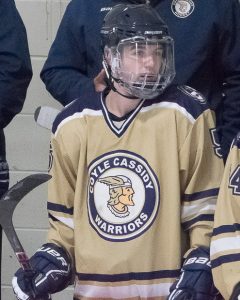 The Warriors return a total of 12 varsity players from last season.

Those returning from a year ago will be the strength of the team starting from the goal out. Senior goaltender Brett Borges (2.02 GAA /.928 save percentage) competes hard and gives the team a chance to win every game. Senior Shaun Galbato (5-8-13) will be the stalwart on defense this year along with Junior Will Tripp (0-6-6); both will play in every key situation. With them on the blue line are juniors Kenny Olivieri and Matt Flynn and Sophomore Brendan Flaven.

“We have a very young team with only three seniors,” Stang coach Ken Gouveia said. “It will be a challenge to qualify for the tournament with a tough schedule as usual. This team will have to scrap for everything it gets. A few players must emerge offensively for the team to be competitive.”