Burlington becomes the No. 7 seed in the 1A and will face two-time defending champion No. 2 BC High in the first round of the double-elimination tournament at Loring Arena (TBD). Framingham will be seeded No. 8 and face off against No. 1 Arlington, at Canton Ice House 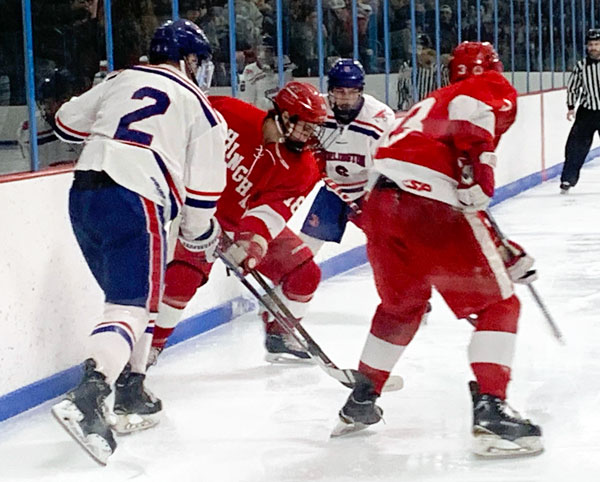 With time melting away in third period of a tie game, Burlington’s Jack Jay deposited the game-winner past Hingham keeper Luke Merian with 2:21 remaining. The play developed off a faceoff win by Ryan O’Halloran, who stepped a round a Hingham defender and delivered a cross-crease pass to Jay.

Hingham pulled the goalie and called its timeout with 1:35 to play but couldn’t beat Red Devils’ goalie Joe Trabucco for the equalizer despite a few good looks.

The Harbormen scored early and late to grab a 2-1 lead after one period.

Following an offensive zone faceoff win, Grady Harrington re-directed Ronan Mulkerrin’s shot from the right point past Trabucco to make it 1-0. The Devils tied it at 8:29 when Cam Costa banged in his own rebound. Sean Malone and Ray Magliozzi had the assists. Hingham answered on the power play with 1:22 left in the period when Terrance Concannon parked himself at the left post and converted Tim Carroll’s initial shot.

Costa’s second of the game pulled Burlington even at 6:59 of the second period. John Condon’s pass from the right circle found Costa a stride clear of a Hingham defender for a far side finish.

An apparent Hingham goal in the first minute of the third period was waved off after the net dislodged when Aidan Brazel slid into it. Merian and Trabucco traded key saves from that point until Jay’s deciding strike.

Burlington also won a regular season meeting between the teams, 3-0. 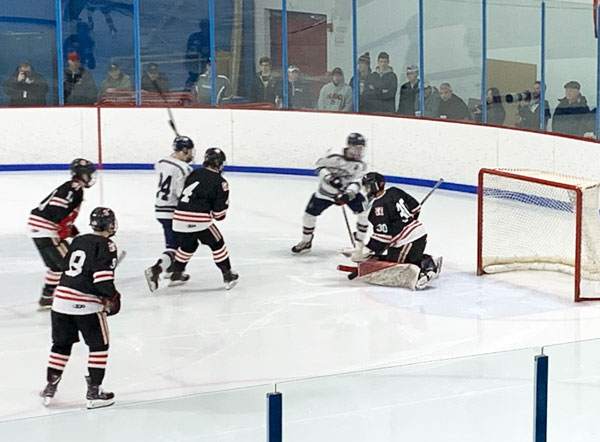 Senior captain Will Trischitta, the leader of Framingham’s offense all season, scored his 20th goal of the year at 7:05 of the second overtime with the teams skating three aside to send the Flyers into the 1A.

Trischitta came off the right wall and snapped a wrist shot past Rockets’ keeper Dylan Emery. Reading sent the game into OT on Jake Donovan’s tying goal with 0.8 seconds left in regulation.

The Flyers scored the first period’s lone goal on the game’s first shot at 1:23. Parked at the post, sophomore Thomas Duane re-directed senior captain Jared Shimelman’s slapper for a 1-0 lead.

That lead stood until deep into the second period when Reading’s Shawn Golden tied it on a breakaway at 10:39. However, the Flyers regained the lead at 12:03 when Duane jumped on a loose puck in the slot and deposited a wrist shot for his second of the game.

After Emery and Jake Handy matched marvelous saves down the stretch and just as it appeared the Flyers would fend off the Rockets’ final surge with an extra attacker, Donovan tipped home Matt Fiorenza’s shot with 0.8 seconds remaining.

Handy’s save on Sean Barbera’s breakaway with the team’s skating four aside in the first OT sent it to a second eight-minute session with three skaters each. He continued his outstanding performance as Reading controlled the play until Trischitta’s game-winner. Reading had 12 shots on net in that second overtime session.