One team played a full season, the other took a pause midway through. One sat near the top of the rankings from Day 1, the other was on a bit of a roller coaster. And then there is the fact that Sheehan and North Haven split a pair of meetings in the final weeks of the season.

So which one gets the nod in the final Hockey Night in Boston Connecticut Division 2 rankings of the season?

We’re going to give the nod to the team that won the final matchup, and then followed that up with a conference championship. It’s hard to say what would have happened had there been a postseason tournament, but North Haven did what it could with its abbreviated schedule. The Indians suffered their other loss early in the season to Division 1 West Haven, and they earn the slight edge for the No. 1 spot in the end.

No. 2 Sheehan obviously had a tremendous campaign of its own after moving up from Division 3, including a win over Daniel Hand and splits with Lyman Hall and North Haven.

Lyman Hall caps its first season flying as a solo program with the No. 3 ranking, after falling short against Cheshire in the SCC/SWC Division 2 semifinals.

No. 4 Daniel Hand, No. 5 Trumbull and No. 6 East Catholic all missed out on the opportunity to play in postseason tournaments.

No. 7 Wethersfield pushed as hard as it could at the end before falling to Newington in five overtimes in the CCC South semifinals.

A couple of different teams could have had a claim for the No. 8 spot. Cheshire got red-hot down the stretch before falling to North Haven on the final day, but the last nod goes to Farmington Valley. The Generals played six games against Division 1 opponents, including a loss to Simsbury in the CCC North semifinals. 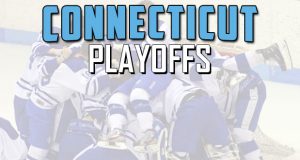