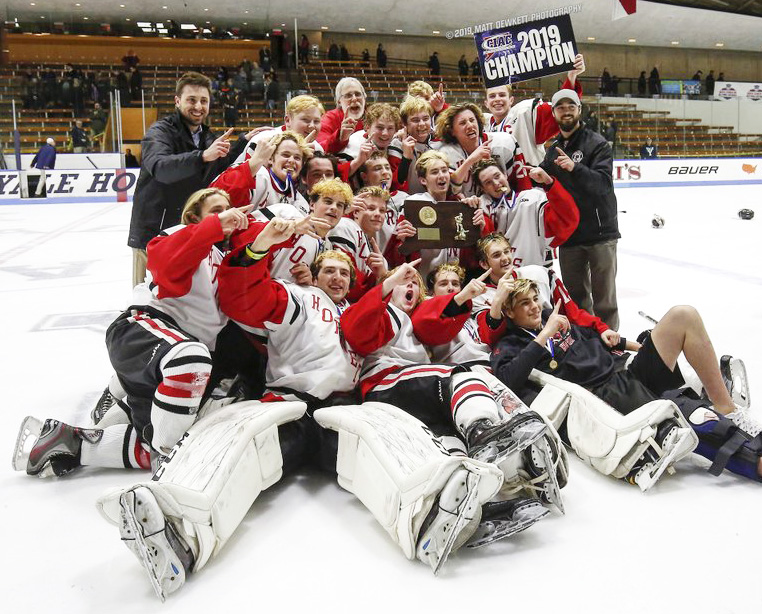 “This team set a goal for themselves after our first round loss last year and were determined to make a run at both the conference and state championships, said Branford coach Jim DiNapoli. “They are a special group that made going to the rink everyday a lot of fun! From the five seniors to our one freshman, they all give 100%. Whether an individual plays 45 minutes or 45 seconds a game they are all equally as committed and equally as important to the club. I think the success of this season is a reflection of that commitment.”

The Hornets overcame a big blow in the first period when star defenseman Chris Donadio went down with an injury and could not return. But, the Hornets were able to overcome that. 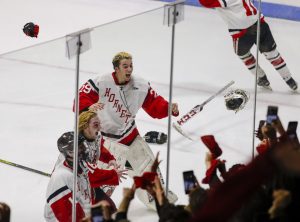 Players skate towards their fans to celebrate. Photo provided by Matt Dewkett @MDewkettPhoto

“The first period was crazy, especially losing Chris to a knee injury,” said DiNapoli.  “Chris is a main cog on this club and instead of getting down the boys picked themselves up and played the game with great resiliency and commitment.”

Following a tight-fisted, penalty filled first two periods, in which neither club could find the back of the net, Branford broke the 0-0 deadlock in the third. Spencer Engstrom put the Hornets ahead to stay after crossing into the offensive zone before beating Tomahawks goaltender Brendon O’Connor top-right shelf with 11:24 remaining.

Staying tight inside the defensive zone, Branford kept Glastonbury (14-9-2) at bay for the remainder of the contest. The Hornets then sealed the deal thanks to Jack Manware’s empty-net score with 0:31 to go.

The Hornets had lost to Glastonbury (4-0) in its season opener back on December 12th. 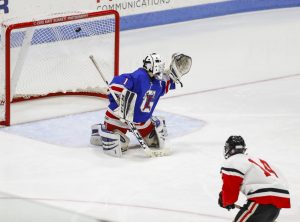 “The goaltending for both clubs was outstanding, DiNapoli said. “Brendan shut us out the first game of the season and the first two periods last night so it was a big lift when Spencer was able to get us on the board early in the third.”