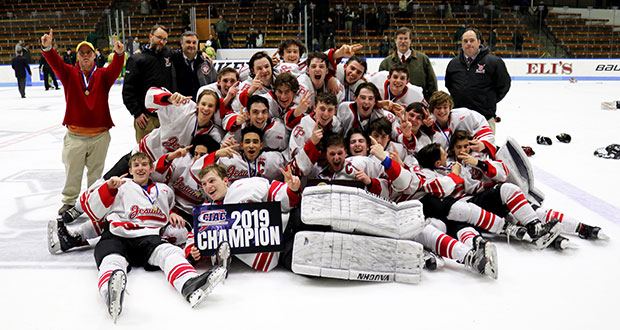 The Jesuits gained control of this one from the outset, scoring four times over the first two periods to pull away from the Green Knights at Yale’s Ingalls Rink.

The victory marks the second title in as many years for fifth-seed Fairfield Prep (15-8-1). The Jesuits have now won 18 state championships overall, seventeen as a Division 1 entry.  At one point this season, Prep was 3-6-0.

Fairfield Prep wasted no time setting the tone in this one as it raced out to a 2-0 lead after one period. Junior Tommy Quinn got things started by netting his first varsity goal off a rebound at 10:36. Then, with just 45 seconds remaining in the frame, Lucas Baksay carried the puck into the low slot and fired a shot that caromed off the stick of Notre Dame-West Haven defenseman Connor Morgan and past goaltender Connor Smith (24 saves).

“Scoring first was crucial,” said Fairfield Prep coach Matt Sather.  “I also think the fact that Tommy Quinn was the player to score first was crucial.  Tommy has been snake-bit all year. He always came close, but never finished.  For him to get his first career varsity goal in that moment was special. It also energized the whole team who had been pulling for him all year.” 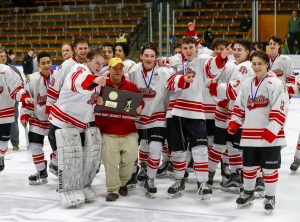 The Jesuits continued their stranglehold over the Green Knights to begin the middle period. Just 2:29 in, junior forward Jack Esse tallied to make it 3-0. No 6 Notre Dame-WestHaven (13-10-1) finally got on the board, at 11:11, after Rory Andriole, taking a nice feed in the high slot from John D’Errico, sent a hard wrist shot by Jake Walker. The senior netminder, who has been solid throughout the postseason, stopped 22 Green Knights shots.

It only took 45 seconds for the Jesuits to respond. Sophomore Mason Whitney potted a goal to send Fairfield Prep into the second intermission on top 4-1.

Once again, the Jesuits struck first to start the third. At 2:46, senior Colin Bella, off a face-off inside the left circle, fired a sharp angle shot into the far right corner, pushing Fairfield Prep’s advantage out to four goals.

“Another key for us was balanced scoring,” Sather said.  “We got additional goals from each of our 4 lines.  Mason Whitney, Lucas Baksay, Jack Esse and Colin Bella.”

To the Green Dragons’ credit, they continued to battle. It would finally pay off for them after sophomore Charlie Andriole sent a shot past Walker, from above the left circle, with just over six minutes to go. But that would be as close as Notre Dame-West Haven would come. Fairfield Prep proceeded to tie up the neutral and defensive zones, and run off the remaining time on the clock to claim victory. The two powerhouses split their two regular season games. 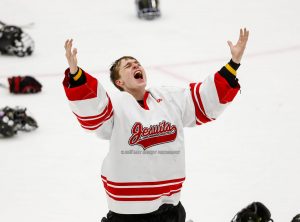 “Defensively, we were led by our captain, Connor Boyle, who provided some grit in front of our net,” added Sather. But the inspired play of Cooper Eckert, a converted forward, was really one of the key developments in our season. Our best, and most consistent, player all year was our goaltender Jake Walker.  He came up huge, handling multiple chaotic scrums in front of the net and standing tall during a 5-on-3 power-play.”