#2 Lyman Hall/H-K/Coginchaug (7-3-0) edged Newtown (3-2) in its only action of this past week, its second straight overtime win.

This Wednesday, the top two teams will face off in a showdown set for 8pm at the Milford Ice Pavilion. Lyman Hall also has Masuk (Saturday), while Staples will see Trinity Catholic, also on Saturday.

The Eastern CT Eagles (6-1-1) move up to #3 after a win over Tri-Town 8-5. The Eagles also had a tie with Massachusetts opponent Mt. Everett. They get the Redhawks on Wednesday before a rematch Friday with Tri-Town. 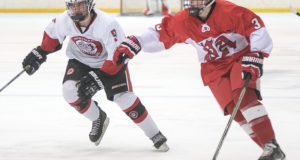